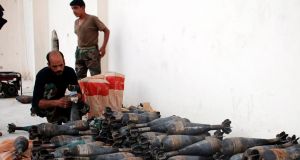 UN experts charged with starting the process of verifying and eliminating chemical weapons arrived in Syria today for the mission endorsed by the UN Security Council.

A convoy of about 20 United Nations vehicles carrying the experts, equipment and security personnel crossed the border from Lebanon shortly after 1130 GMT, a Reuters television cameraman said.

The UN mission, which Washington and Moscow hammered out after an August 21st chemical weapons attack in Damascus prompted US threats of air strikes against the Syrian government, is expected to continue until at least mid-2014.

More than 100,000 people have died in Syria’s conflict, which began in early 2011 with peaceful demonstrations seeking more democracy but has deteriorated into sectarian civil war.

Alluding to the violence, Syria’s foreign minister yesterday compared what he described as an invasion of foreign terrorists across Syria to the September 11, 2001, attacks on the United States.

Washington dismissed the remark as offensive and disingenuous.