President says there were ‘certainly three attackers ... there is one who is on the run’ 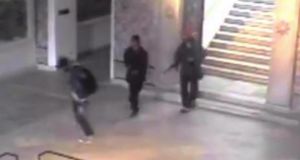 A handout photograph from the Tunsian Interior Ministry showing gunmen walking through the Bardo museum, in Tunis during the attack that killed 25 people including 20 foreign tourists. Photograph: EPA 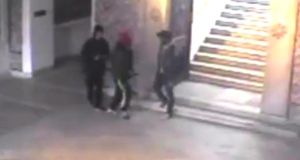 A handout photograph made available by the Tunsian Interior Ministry on Sunday showing gunmen walking through the Bardo museum, in Tunis, on Wednesday. Photograph: EPA 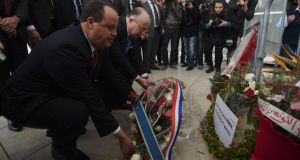 Tunisian authorities said they are searching for a third attacker who they believe took part in the deadly Bardo Museum attack in which 23 people, mostly foreign tourists, died.

Tunisia’s president said in a live TV interview on Sunday that a third attacker is still “on the run” and that there were “certainly three attackers... there is one who is on the run, he won’t get far,” president Beji Caid Essebsi said on Sunday.

Two of the assailants were shot dead during the attack.

Around 20 suspects have been arrested in connection with the attack but just two gunmen were initially thought to have assaulted the museum.

Hundreds of people gathered for a mass in the cathedral in Tunis on Saturday, lighting candles to remember the victims, who included three Tunisians, in a ceremony attended by government ministers.

Outside, there was a heavy police presence along the central Habib Bourguiba boulevard.

But Tunis was calm, with a music festival going ahead in the city centre.

Wednesday’s assault, the deadliest involving foreigners in Tunisia since a 2002 suicide bombing on the island of Djerba, came at a fragile moment for a country just emerging to full democracy after a popular uprising four years ago.

The government said the two gunmen had trained in jihadi camps in Libya before the attack at the Bardo museum inside the heavily secured Tunisian parliament compound.

Japanese, French, Polish, Italian and Colombian visitors were among the victims.

“There is a large-scale campaign against the extremists,” he said.

The ministry released a photograph of another suspect and asked Tunisians to help with information.

The government plans to deploy the army to major cities to improve security following the shootings.

Islamic State militants have claimed responsibility for the attack, but social media accounts tied to an al Qaeda-affiliated group in Tunisia have also published purported details of the operation.

Whoever was responsible, the Bardo attack illustrates how Islamist militants are turning their attention to North Africa.

A particular focus is neighbouring Libya, where two rival governments are battling for control, allowing Islamic State to gain a foothold.

The United States is increasingly worried about the growing presence of Islamic State militants in Libya.

In an interview with Paris Match magazine, the Tunisian president said.

There were as many as 10,000 young Tunisian jihadists in all.

“Among the often desperate young unemployed, the call to jihadism has worked,” he said.

“Four thousand Tunisians have joined jihad, in Syria, Libya and elsewhere, and some 500 have already come back here, where they pose a threat. That is not to mention the five or six thousand others we have succeeded in preventing from leaving.”

US officials said that because of its strategic position, Libya has become a springboard for would-be fighters from across North Africa wanting to link up with Islamic State.

The militant group controls large swathes of Iraq and Syria, and claimed responsibility for suicide bombings at two mosques that killed at least 137 people in the capital of Yemen on Friday.

“This attack will have an impact, no doubt. But so far we have only had a small number of cancellations,” tourism minister Salma Loumi said.

“On the contrary, we are seeing support from western countries and travel agencies.”