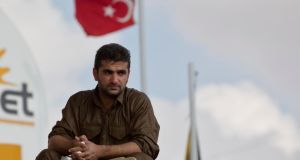 An Iraqi Kurdish peshmerga soldier on the outskirts of Suruc, near the Turkey-Syria border. Photograph: Vadim Ghirda/AP

News of the deployment at the besieged Kurdish town of Kobani of 150 Iraqi Kurdish peshmerga militiamen and 52 fighters claiming connections with the rebel Syrian Free Army coincided with a UN report that 1,000 foreign jihadis have been entering Syria each month.

Given that more than 16,000 jihadis from abroad are now estimated to be in Syria, the proposed entry of 202 fighters to Kobani amounts to token reinforcement rather than a serious effort to counter Islamic State (IS).

The reinforcements are too few and too lightly armed to alter the tide of the battle even though the US has stepped up aerial assaults. Unless a substantial number of boots-on-the-ground are deployed, US-supported defenders cannot counter IS.

Ground forces are simply not available locally. The peshmerga cannot afford to dispatch a substantial number of fighters to Kobani as Iraqi Kurdish forces are under serious challenge by IS fighters surrounding the oil city of Kirkuk, considered by Kurds to be their spiritual capital.

The struggle for Kobani has been prolonged by Turkey’s refusal to halt the two-way flow of IS and other insurgent fighters across the frontier with Syria. Observers report they easily cross from Turkey into Syria and vice-versa. Insurgents have wounds treated in Turkey and visit families there before returning to the battlefields of Syria.

Ankara seeks to maintain good relations with Massoud Barzani, president of the Iraqi Kurdish autonomous region, and to boost the prospects of the Syrian Free Army, which has been excluded by the US from the anti-IS coalition.

Instead of relying on and bolstering the Free Army to tackle Islamic State, the White House has decided to recruit and train 5,000 fighters from scratch although the Pentagon opposes this policy, claiming that 15,000 are needed quickly.

Armed forces chief Martin Dempsey has criticised the administration’s policy of bolstering the Iraqi government while refusing to clarify its stand toward Syrian President Bashar al-Assad, whose army remains his country’s bastion against Islamic State.

Washington has also been criticised for focusing on Kobani. IS fighters are at the gates of Baghdad, a major regional capital of 3.8 million, an objective of far greater import than backwater Kobani with a former population of 60,000 which has fled to Turkey.