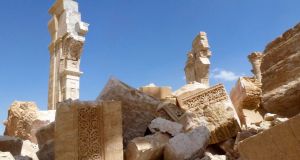 Syria’s armed forces have driven Islamic State militants out of Palmyra, recapturing the city of Roman ruins as part of a regional push that is putting pressure on jihadis across Syria and Iraq.

Under the cover of Russian air strikes, Syria’s military fought alongside foreign Shia militia fighters, including the Lebanese force Hizbullah, to retake the city in a three-week offensive that is a symbolic victory for Syrian president Bashar al-Assad.

Syria’s army command said Palmyra would be its base to launch operations against Islamic State, also known as Isis, in the oil-rich province of Deir al-Zor and the northern city of Raqqa, the de facto capital of the jihadi forces.

Mr Assad hailed the recapture of Palmyra as “historic” during a meeting with a group of French parliamentarians and academics to the Syrian capital Damascus, arguing that his Russian-backed forces should lead the fight against Isis.

“This important success is a sign of the effectiveness of the strategy of the Syrian army and its allies in the war on terror in comparison to the lack of seriousness by the US-led coalition . . . given how little the coalition has achieved since it was established a year and-a-half ago,” the Syrian president was cited as saying by state news agency Sana.

Syria’s state television channel showed video of cracked columns and pieces of sculptures strewn across the floor of the Palmyra museum.

Ancient Palmyra, which lies to the southwest of the modern city and dates from the first century, is known for its long avenue of Roman columns that date from the time it was a cultural crossroads of the ancient world.

The modern part of the city is home to Palmyra prison, which had held hundreds of Syrian and Lebanese political prisoners.

The capture of Palmyra in May 2015 quickly followed the fall of the Iraqi city of Ramadi, and fuelled fears that Isis remained unaffected by a coalition offensive.

The US-led coalition responded to Isis advances last year by increasing equipment and re-training for Iraqi forces and deepening partnerships with Kurdish fighters in Syria.

In the year it held Palmyra, the jihadis beheaded Khaled al-Asaad, a respected archaeologist, and blew up the 2,000 year-old temple of Baalshamin, one of the area’s best-preserved Roman temples.

After saying it had undertaken a partial pullout from Syria earlier this month, Russia intensified strikes on Isis targets in support of Mr Assad’s forces.

Last week Iraq’s armed forces announced the start of a campaign to recapture Mosul, a city of 2m residents, but it is widely expected to be a protracted campaign.

Syrians who oppose the regime expressed mixed feelings over the news from Palmyra.

Ayed al-Utayfi, a tribal sheikh from the city who backs the opposition, said he worried whether Palmyra’s largely Sunni residents would be able to return, citing concerns that regime forces would accuse them of being pro-Isis.

He also said the opposition feared that Russia would put pressure on western countries to get rebels they have funded to fight alongside Mr Assad.