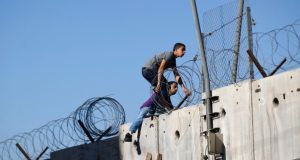 Palestinians not permitted by Israeli security forces to cross into Jerusalem from the West Bank due to an age limit, climb over a section of the controversial Israeli barrier as they try to make their way to attend the first Friday prayer of Ramadan in Jerusalem’s al-Aqsa mosque, in the village of Al-Ram, near Ramallah. Photograph: Mohamad Torokman/Reuters.

Thousands of Palestinian mourners carried the burned body of 17-year Mohammed Abu Khdeir through the streets of an East Jerusalem suburb today.

By the time the funeral was over the streets were blocked by temporary barricades and littered with broken masonry, the tarmac scorched black after almost three days of rioting to protest against his murder, which Palestinians allege was carried out as a revenge attack for the killing of three Israeli teenagers.

The last week, which began with the funerals of the Israeli teenagers and ended with that of the Palestinian boy, has seen relations between Israelis and Palestinians pushed to the brink once more.

At the hilltop cemetery of Modiin on Tuesday it was the blue and white of Israel’s flag that served as a shroud on the coffins of Eyal Yifrach (19), Gil-ad Sha’er, (16), and Naftali Frankel (16).

On Friday it was green, white and black of the Palestinian banner that enfolded Mohammed Abu Khdeir on his final journey.

While funerals like Abu Khdeir’s are familiar on the West Bank and Gaza, for Jerusalem it was an remarkable event - marking the first Friday of Ramadan with an extraordinary security clampdown.

The milling groups of young male mourners, some of them wearing masks, chanted: “Enough, enough we will pay with blood” and “intifada, intifada”.

As he was buried, several volleys of automatic weapons fire rang out from rooftops near the cemetery: again unusual for Jerusalem.

In between the two funerals it has become a frightened and divided city. The light railway - Israel’s grand project to link the east and west of the city - is now cut at Shuafat, its stations damaged.

Residents who look Arab have been assaulted and abused in the street. The mourners for Mohammed Abu Khdeir began coming early, even before it was confirmed his body had been released by Israeli police, to sit in the large mourning tent outside the family’s home.

His father, Hussein, said doctors had completed an autopsy on Thursday evening on the badly burned body of his son, found in a forest to the west of the city an hour or so after he was dragged into a car by two men as he was waiting to pray at just before 4am on Wednesday morning.

Israeli prime minister Benjamin Netanyahu tried to calm the situation on Thursday, condemning Abu Khdeir’s killing and vowing to find the attackers. “We don’t know yet the motives or the identities of the perpetrators, but we will. We will bring to justice the criminals responsible for this despicable crime whoever they may be,” Mr Netanyahu said in a speech celebrating US Independence Day at the American Embassy in Tel Aviv.

“Murder, riots, incitement, vigilantism, they have no place in our democracy.”