Syrian conflict ‘looking more like a regional war with an epicentre in Syria’, says envoy

Difficult questions to be confronted in Afghanistan and Syria, says Louise Arbour 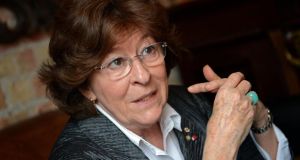 The deadlock in Syrian peace talks may yet prompt a revival of demands for a western military intervention in the conflict, a former UN High Commissioner for Human Rights has warned.

Louise Arbour, the recipient of an award at Trinity College Dublin last night for her work in international law, also said the looming withdrawal of western forces from Afghanistan carried potential to destabilise the country itself and the wider central Asian region.

Ms Arbour, a former member of the Supreme Court of Canada, is president and chief executive of the International Crisis Group, an independent non-governmental organisation for the prevention and resolution of deadly conflict. In the 1990s she was chief prosecutor for the International Criminal Tribunals for the former Yugoslavia and for Rwanda.


Award
The Trinity Praeses Elit Award, founded by former president Mary Robinson, is in recognition of Ms Arbour’s work for the advancement of legal discourse through excellence of advocacy and commitment to causes. President Michael D Higgins received the same award last month.

Interviewed yesterday by The Irish Times , Ms Arbour expressed concern about the escalation of the conflict in Syria.

“There was a time where we would have been talking about a Syrian conflict with a danger of spillover, and then we talked about a proxy war in Syria and now I think it’s looking more like a regional war with an epicentre in Syria.”

Although the lack of progress during weekend talks in Geneva pointed to fresh efforts to bring the “sponsors” of both the Assad regime and the rebels around the table, many analysts held out little hope of a breakthrough in that forum.

“It’s complicated enough to get on the one hand Iran, Hizbullah, and then Saudis, the Qataris, Jordan, Lebanon, Turkey, not to mention the US, Russia. All this configuration of actors – potential spoilers – that may be an avenue that needs to be explored,” Ms Arbour said.

“Many would say this is now too late for that: in part the positions are too entrenched, they’re all too involved in the conflict.”

Asked what the outlook would be if such engagements failed, she said there might well be a revival of calls for the same kind of military interventions that were sought before the chemical weapons deal with the Assad regime.


Military intervention
“It’s possible that if there’s no serious penetration of humanitarian aid and we continue to see the level of casualties increasing that the time may come when there will be a kind of popular opinion revival of this idea. Mind you, in a lot of places its wasn’t very popular,” she said.

“It’s not impossible that there’ll be a call for everything from increased military assistance to the opposition, to increased weaponisation of the conflict, all the way to actual . . . no-fly zones, which of course mean an attack. You cannot enforce a no-fly zone without taking down the air defence system. So I think this may resurface as an option unless there’s some sort of revival of the political negotiations.”

Ms Arbour, who also spoke of her concern about escalating violence in Central African Republic and South Sudan, said imminent Afghan elections and the withdrawal of the US-led International Security Assistance Force (ISAF) could prompt a “perfect storm” of disruption.

“The spring will bring elections and the withdrawal of ISAF and the potential destabilisation in our opinion of all of central Asia, which is a bundle of extremely weak states who could be very rapidly destabilised,” she said .

Beyond Afghanistan itself, Tajikistan and Kyrgyzstan were “most vulnerable” but Uzbekistan was also at risk.

“And then [there is] the possibility that a lot of these radical jihadist groups in Afghanistan . . . use again central Asia as a backdrop for continued operations in Afghanistan or just to destabilise these countries.”

She attributed much of this vulnerability to the failure to develop civic institutions during the western intervention.

“I think the deficits of all the money and efforts that have been deployed in Afghanistan again is in institution building.

“What is left behind has been an enormous effort at building the security sector, both the Afghan army and police force, with modest results, and very little in building the other institutions of governance. And of course the Taliban insurgency still has enormous capacities.”


Short-lived gains
“Our last report on Afghanistan was on women. And it’s very clear that for the gains that have been accomplished to bring Afghan women into school, into the workforce, given them adequate healthcare, all this could evaporate overnight – and not just by the Taliban taking over but by forces in parliament that could reverse all these gains very rapidly. The elections, how free and fair will be they be? How acceptable will be the result?”