Syrian authorities struggle to save antiquities from devastation by IS

Authorities avert destruction at some sites by moving artefacts to safety 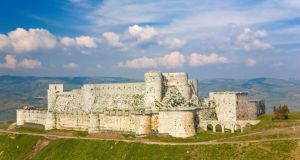 Crac des Chevaliers, an 11th century crusader castle in Syria which has been reclaimed by the country’s department of antiquities, having been seized by insurgents in 2012. Photograph: Getty Images/iStockphoto

Mines and munitions have been swept and repairs have begun. The department’s employees have returned and taken custody of this Unesco world heritage site, one of six in Syria.

Seized by insurgents during 2012, the vast, imposing fortress was sucked into the battle for Syria, with heavy machine guns replacing the bows and arrows of the past, and mortars firing shells packed with explosives instead of catapults flinging rocks.

“Sites damaged in clashes can be reconstructed,” says Maamoun Abdulkarim, who as professor of archaeology at Damascus University was drafted in to head the antiquities department. “But sites that are bulldozed are gone forever,” he adds, refer ring to the ancient Iraqi cities of Nimrud and Hatra levelled by Islamic State (IS). “We are facing barbarians . . . terrorists coming from all the countries of the world.”

The international community refused to acknowledge the IS threat until last June when the group seized Iraq’s second city, Mosul, long after IS, other insurgent groups and professional art theft “mafias” had been looting Syria’s archaeological sites and selling treasures on the black market in stolen antiquities.

A key site that has been systematically pillaged is the third-century BC Hellenistic, Parthian and Roman city Dura-Europos, which houses a well-preserved synagogue as well as an ancient Christian chapel with paintings of Jesus thought to have been created in 235 AD.

As it was abandoned in 256–257 and subsequently not built upon, Dura-Europos has been an important source of information on its period of settlement. Looting was conducted by the western-allied Free Syrian Army and the antiquities mafia, ever present during wars and natural disasters.

A second site of great importance is the Semitic city of Mari (2900 BC – 1959 BC), located in Deir al-Zor province, currently a battleground between IS and government forces. IS “allows excavations and takes a percentage of the profits,” Prof Abdulkarim says.

In Idlib province, where there are 700 Roman and Christian sites, local people have exercised some control but at Tell Sheikh Hamad in Hasakah, in the west, looters have assaulted the site of the ancient Assyrian city, Dur-Katlimmu (13th-sixth centuries BC).

Prof Abdulkarim says the international community has not co-operated in closing frontiers to the illicit trade in antiquities and criticises governments imposing sanctions on Syria.

“The embargo attacks all sectors of society, not only the government,” he says, adding that sanctions have starved the antiquities department of funds and prompted governments to shun the department.

If Unesco-related cultural bodies and archaeologists who have worked in Syria had not maintained relations, “We would have been isolated and had no support,” he says.

The situation began to improve “over the past six months when Germany changed and began to give us support in training and research.” Italy, France and Japan have also established contact.

In spite of recent openings, he warns: “If the international community does not change its approach there will be a disaster in the region: in Syria, Iraq, Egypt, Yemen . . . and in Afghanistan and Mali.”

His department has averted the wanton destruction wreaked by IS militants with hammers and drills at the Mosul Museum by packing up and evacuating movable artefacts. Local museums, now “99 per cent protected” he says, “held 300,000 objects and a thousand Ottoman manuscripts dating from the 16th to the 20th centuries”.

“After Mosul, we evacuated 13,000 objects from [the museum at] Deir al-Zor, which was under IS threat. This was very dangerous because our employees could have been killed [by IS] and I could have been put in prison” since moving valuable artefacts from the provinces to Damascus was risky. The objects were taken out of vulnerable storage locations, moved to a government airbase in the war-torn province, and put on to military aircraft carrying bodies of soldiers killed in battle back to the capital.

“Our employees accompanied the items. They have all been labelled and photographed and placed in secret and secure storage in Damascus,” he says. They are not kept at the national museum, which has been closed to the public since the war began although its garden remains open.

“Every day we contact our colleagues in each local district. We have 2,500 working in areas under government control and in some areas held by some mixed opposition . . . Our employees lost homes and family members to defend our cultural heritage.”

In spite of divisions between government and opposition- held areas, he insists Syria must be treated as a single historical, archaeological and geographical entity: “We are all Syrians with the same identity . . . If we are united we will save our cultural heritage for all Syrians.”