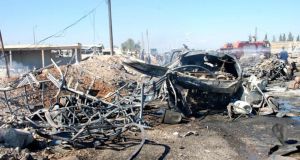 Debris and a destroyed vehicle are seen after a suicide bomber in a truck carried out an attack at the eastern entrance of Hama city. Photograph: SANA/Handout/via Reuters

The man blew himself up inside the vehicle on a busy road on the outskirts of the city, the SANA agency said.

It blamed the attack on “terrorists”, the term it uses to describe rebel forces trying to topple president Bashar al-Assad. The pro-opposition Syrian Observatory for Human Rights said the attack targeted an army checkpoint.

Syria’s two and a half year old conflict began as peaceful protests but has degenerated into civil war. Rebels have been joined by hardline Islamists, some of them linked to al Qaeda, and several groups have used suicide bombs to attack military and political targets.

Pictures on Syria TV showed firemen trying to put out huge fires and black clouds of smoke rising from charred trucks and cars.

“I discussed the Syria file with Lakhdar Brahimi and it was decided that the Geneva meeting would take place on November 23rd and arrangements are being made to prepare for this conference,” Mr Elaraby told reporters in Cairo after a meeting with Brahimi, the international envoy for Syria.

But at the same news conference, Mr Brahimi said: “The date has not been officially set.”

A senior Syrian official said last week that the long-delayed conference was scheduled for November 23rd - 24th , but co-organisers Russia and the United States said no date had been set.

International efforts to stop the bloodshed in the conflict in Syria have stuttered, but a deal reached last month for Syria to get rid of its chemical weapons arsenal rekindled efforts to convene the conference, dubbed “Geneva 2”.

A deeply divided opposition is, however, reluctant to attend, and president Bashar al-Assad’s government said it would not consider any deal that required the president to step down.

Najib Ghadbian, the opposition coalition’s US representative, said an important component of the coalition had decided against taking part, but said other members of the umbrella group could still decide to go, assuming Mr Assad was not there.

Mr Brahimi, who earlier said there would be no preconditions to attending the peace talks, said on Sunday a conference could not be convened without a “convincing opposition that represents Syria’s opposition population”.