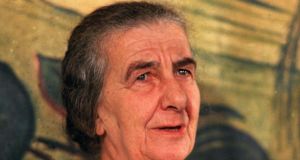 The website of the Israeli tourism ministry tells us that: “Various peoples have lived in the Negev since the dawn of history: nomads, Canaanites, Philistines, Edomites, Byzantines, Nabateans, Ottomans and, of course, Israelis.”

It’s good to see the existence of the Edomites acknowledged. They are, of course, believed to have been descended from Esau, the wild-at-heart hustler who famously sold his birthright to Jacob for a mess of pottage.

There’s little trace of the Edomites left, in the Negev or anywhere else. But at least they haven’t been entirely forgotten.

Likewise, the Nabateans – a “particularly fascinating” people, says the ministry. “Lords of the desert . . . [Their] caravans of camels traversed this route carrying spices, perfumes and salt.”

Sadly, the Nabateans, too, have faded from history. I gather that Rabel II was the last of the Nabatean kings, upon whose death in AD 105, the Romans, under Emperor Trajan, annexed their lands.

“Lords of the desert”, though. “Caravans of camels . . . ” Sound almost like Bedouin. But there are no Bedouin in the Negev in the ministry’s account. Nor Arabs of any sort. Only peoples and communities which have ceased to be. And, of course, Israelis. This version of the demographics of the Negev provides a neat context for implementation of the Begin-Prawer Plan for the relocation of tens of thousands of Bedouin from “unrecognised” villages into government-constructed townships.

Title to the land
The rights of the Bedouin in the land where they have lived for hundreds of years are not recognised in Israeli law because in the vast majority of cases the Bedouin have never registered title to the land. The land is deemed to belong to the state on account of its mawat (dead) status. Sixty-five per cent of the Negev – which comprises more than half the land area of Israel – now falls into this category.

Camps or compounds
It has ever been thus – the lands of the people that settlers want rid of declared empty, uninhabited, “terra nullius” – owned by nobody. Enclosing any lost souls wandering the bleak terrain within camps or compounds or townships is, then, an act of kindness.

Recommending the Indian Removal Act of 1829, President Andrew Jackson, allowed that: “Towards the aborigines of the country, no one can indulge a more friendly feeling than myself, or go further in attempting to reclaim them from their wandering habits and make them a happy, prosperous people.” His government, he continued, “had kindly proposed to pay the whole expense of removal and settlement.” The Israeli government has kindly proposed to follow suit.

Protests against the plan to cleanse the Bedouin from the Negev took place last weekend in various countries, including in Israel and involving Israelis. But the chances of the Israeli authorities taking heed are as near to nil as makes no difference. After all, they are not doing anything new here. And the illegality of their actions in the past has had no serious consequence.

Between March and July this year, defence minister Moshe Ya’alon approved the illegal construction of 3,000 housing units in the West Bank – 550 in Talmon, 984 in Givat Ze’ve, 290 in Kedumin etc.

In the space of nine months, approval had been given for an 8-to-10 per cent increase in the number of Israeli settlers illegally occupying Palestinian land – this despite the fact that scarcely a week goes by without some country or group of countries solemnly warning that the expansion of the settlements is not just illegal but ruinous for any prospect of Israeli-Palestinian agreement.

And yet government ministers in various countries apparently feel at ease attending film festivals and the like organised by the sponsors of settlement expansion. It’s almost as if the Palestinians didn’t exist. Which, come to think on it, is what prime minister Golda Meir once almost said: asked to defend the forcible expulsion of of Palestinians to make way for the establishment of the Israeli state, she responded: “There were no such thing as Palestinians.”

And, no Bedouin in the Negev either. But let’s hear it for the Edomites!