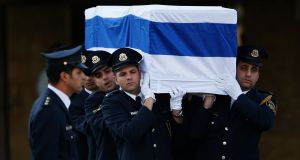 Israel buried former prime minister Ariel Sharon at his family farm today, celebrating the military achievements of a man seen as a war hero at home but as a war criminal by many in the Arab world.

Eulogised first in a ceremony in Jerusalem, and later in the green fields of his southern estate, a stream of speakers hailed a life entwined with that of his country, while gently alluding to the controversies that also defined his career.

US vice president Joe Biden and former British prime minister Tony Blair laid wreaths at his grave, 10km from the border of the Gaza Strip, with the army on high alert lest any rockets be fired out of the Palestinian territory.

The army said two missiles were shot into southern Israel shortly after the funeral ended, causing no damage or injury. “We are accompanying to his final resting place today a soldier, an exceptional soldier, a commander who knew how to win,” Israeli president Shimon Peres said in Jerusalem, Mr Sharon’s hefty coffin draped in Israel’s blue and white flag.

Mr Sharon (85) died on Saturday after spending the last eight years of his life motionless in a hospital bed, pitched into a coma by a stroke and far from the public gaze. The death of the ex-general reopened debate into his legacy. Foes denounced his ruthless conduct in military operations while friends praised him as a strategic genius who as prime minister stunned the world in 2005 by pulling Israeli troops and settlers out of the Gaza Strip - a Palestinian territory in the south.

“The security of his people was always Arik’s unwavering mission - a non-breakable commitment to the future of Jews, whether 30 years or 300 years from now,” Mr Biden said, using Mr Sharon’s nickname. There was no direct mention of events that made Mr Sharon a hated figure in the Arab world, such as the 1982 invasion of Lebanon that he masterminded as defence minister.

However, in his eulogy, Mr Blair said a man known at home as “the bulldozer” had left “considerable debris in his wake”.

Mr Biden referred simply to his “mistakes”, saying: “History will judge that he also lived in complex times, in a very complex neighbourhood.” The Israeli foreign ministry said dignitaries had come from 21 countries, mainly in Europe, but did not list any delegations from the Middle East, Africa or Latin America.

Israel prime minister Benjamin Netanyahu, noting he had not always seen eye-to-eye with Mr Sharon on policy matters, praised the former leader’s commitment to Israel’s security. “Arik understood that in matters of our existence and security, we must stand firm,” Mr Netanyahu said. “Israel will continue to fight terror. Israel will continue to strive for peace, while protecting our security. Israel will act in every way to deny Iran the capability of arming itself with nuclear weapons.”

Beefy and brusque, Mr Sharon was seen as a strategic genius at home, with his crossing of the Suez Canal in the 1973 Yom Kippur war against Egypt still studied in military college. By the same token, the drawn-out 1982 campaign in Lebanon is seen as his worst mistake, which hit a low tide when hundreds of Palestinian civilians in the refugee camps of Sabra and Shatila were killed by Israeli-allied Christian militiamen.

Mr Sharon was forced to stand down as defence chief in 1983 after an Israeli investigation said he bore “personal responsibility” for not preventing the massacre. Written off at the time, he soon bounced back and served as prime minister from 2001 until he was felled by a stroke. Neither Netanyahu nor Peres mentioned the Lebanon war or disengagement from Gaza, which showed Israel could roll back its occupation of the Palestinian territories given determined leadership. Both Mr Biden and Mr Blair welcomed the pullout.

However, one of Mr Sharon’s friends, settler leader Zeev Hever, made clear the sense of hurt felt by some Israelis. “Your disengagement in the final two years of your term from the path we had walked together was particularly difficult and painful,” he told mourners.

Two years after Israel quit Gaza, the Islamist group Hamas seized control, calling for the destruction of the Jewish state. Israel had beefed up security for Mr Sharon’s burial and warned Hamas not to allow rocket fire during the ceremony.

Hamas interior minister Fathi Hamad denounced “our worst enemy, the cursed Sharon” during a rally in Gaza to mark the 2008/9 war with Israel. How to handle Gaza is among the sticking points in Israel’s US-sponsored peace negotiations with Palestinian president Mahmoud Abbas, Hamas’s rival based in the occupied West Bank.

During his brief visit to Israel, Mr Biden will discuss the so far fruitless diplomatic efforts with Mr Netanyahu and Mr Peres, US officials said. The vice president will also seek to ease Mr Netanyahu’s concerns about world powers’ interim nuclear deal with Israel’s arch-foe Iran, which takes effect on January 20th.

Mr Sharon and Mr Peres are the last of the so-called 1948-generation of leaders who played a prominent role in Israeli public life right from the foundation of the nation.

“He left us too soon. But the work of trying to reach peace continues,” said Mr Biden, hinting that had Mr Sharon stayed healthy, he might have ended the decades-old Middle East conflict.