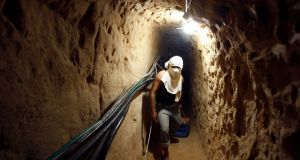 During July and August 2014, Israel fought a 50-day war against Hamas, with the militants making widespread use of deep tunnels to launch surprise attacks on Israeli forces. Israel heavily bombed the tunnels, but not all were destroyed. File photograph: Ibraheem Abu Mustafa/Reuters

It said the collapse occurred on Tuesday night as a result of heavy rain, and that it took two days to find the bodies and announce the deaths.

Mosques across the Palestinian enclave mourned those killed, calling them “Martyrs of the Preparation”, a reference to their work digging tunnels typically used to attack Israel.

“The Mujahedin martyrs were repairing an old tunnel, from which a number of operations were executed in the [2014] war,” a statement issued by the Izz el-Deen Al-Qassam Brigades said.

“The fathers of these martyrs should be proud. The whole world will witness the deeds of their tunnels against the [Israeli] occupier should they dare [to attack] our people and our land,” it added.

Hamas has controlled Gaza since 2007, when it seized power after a brief civil war with the rival Fatah movement. Hamas’s armed wing is one of several militant groups operating in the territory, which is blockaded by Israel and Egypt.

During July and August 2014, Israel fought a 50-day war against Hamas, with the militants making widespread use of deep tunnels to launch surprise attacks on Israeli forces. Israel heavily bombed the tunnels, but not all were destroyed.

Besides the seven militants killed in the tunnel collapse, Hamas’s armed wing said four others survived.

Israeli officials have repeatedly warned about the rebuilding of the tunnels, with some politicians calling for pre-emptive action to neutralise the threat.

“The next conflict in the north or south of Israel is just a matter of time,” Yair Lapid, the leader of Yesh Atid, an Israeli opposition party, told the foreign press this week.

“As we sit here, there are around 1,000 people digging terror tunnels in Gaza, some of them under the border and into Israel,” he claimed.

Last August, Israeli security sources said they were testing new techniques to detect hidden passages but they have yet to announce that they have developed a working system.

Egypt, whose government is deeply hostile to Islamists, has taken steps to destroy a network of tunnels along its border with Gaza, mostly used for smuggling.

As well as blowing many of them up, it has flooded the area with seawater. Reuters