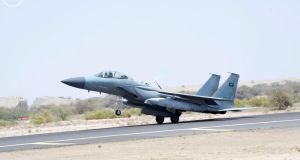 A jet involved in Saudi-led air strikes on Yemen. Humanitarian aid group the Red Cross has claimed that the Saudi coalition is blocking relief efforts in the country. Photograph: Saudi Press Agency/Reuters

The International Committee of the Red Cross (ICRC) said that three shipments of aid and medical staff it is trying to send to Yemen were still blocked, despite appeals to the Saudi-led military coalition which controls Yemeni air space and ports.

The ICRC is seeking security guarantees for two planes to Sana’a, one with medical supplies for up to 1,000 wounded people and a second with 30 tonnes of medical and water sanitation supplies, as well as a boat to take a surgical team to Aden.

On Tuesday the aid organisation accused the Saudi-led coalition, which is waging a 10-day campaign of air strikes on Houthi fighters in Yemen, of preventing aid deliveries.

“The situation is getting worse, every passing hour people are dying in Yemen and we need to bring this in urgently.”

She was speaking ahead of a United Nations Security Council meeting called by Russia to discuss a humanitarian pause in the air strikes.

UN relief coordinator Valerie Amos said on Thursday that 519 people have been killed in the fighting in the past two weeks and nearly 1,700 wounded.

Médecins Sans Frontieres has also said that airport closures and naval restrictions in Yemen have prevented it from sending in medical teams and supplies.

The calls to allow aid efforts came as an air strike on a village near the Yemeni capital Sana’a killed a family of nine residents, in what appeared to be a hit by the Saudi-led military campaign against Houthi militants.

Five other people were wounded and some citizens remained under the rubble, state news agency Saba said.

Residents near Okash village, which is near an air force camp on Jebel al-Nabi Shouieb mountain, said the air strike was on Friday night and killed nine people.

Fighters loyal to Yemen’s president pushed Houthi fighters back from central Aden after they were reinforced with weapons parachuted into their beleaguered section of the southern port city by Saudi-led warplanes.

The military setback for the Shi’ite Houthis came after days of advances in Aden, the last major foothold of fighters loyal to president Abd-Rabbu Mansour Hadi, despite the Saudi campaign of air strikes to halt the group’s progress.

The intervention marks Riyadh’s most assertive move yet to counter what it sees as a spread of Iran’s power in the region.

Aden residents said the Houthi fighters and their allies withdrew from the central Crater district as well as from one of Mr Hadi’s presidential residences that they took 24 hours earlier.

A spokesman for the Saudi-led coalition, brigadier general Ahmed Asseri, said the logistical support airdropped at dawn on Friday had helped turn the tide for Mr Hadi’s fighters.

“They received the support and they were able to change the situation on the ground, driving the Houthi militias out of the palace and the areas that they had briefly taken control of.”

The crates of light weapons, telecommunications equipment and rocket-propelled grenades were parachuted into Aden’s Tawahi district, which is still held by Hadi loyalists, fighters told reporters.

The Houthis, fighting alongside soldiers loyal to former president Ali Abdullah Saleh, emerged as the strongest force in Yemen after they took over the capital Sana’a in September. After they targeted Aden last week, Mr Hadi fled abroad and has watched the situation from Riyadh.

Turmoil in the Arabian Peninsula’s poorest country comes after year of separatism, tribal conflict, sectarian violence and an insurgency by al-Qaeda militants targeted by US drones.

Local militia forces said they killed 10 Houthi militants during the fighting which pushed the group out of Crater.

Two brothers working for the Red Crescent were shot dead while evacuating the wounded to an ambulance, the aid group said. Government forces blamed the Houthis and said the fighters also killed two patients when they shot at the ambulance taking casualties from Aden’s peninsula to a hospital on the mainland.

Tribal sources in Yemen said on Friday that Saudi Arabia had started to remove parts of a fence along its border with the northwestern Yemeni provinces of Saada and Hajja.

This move could be a prelude to an incursion by ground troops, but may also be part of more modest efforts to secure the frontier area.

Saudi Arabia’s Ekbariya television said two border guards were killed in an attack after dusk on Friday near Dhahran. It gave no details.

US government sources said on Thursday that, although Washington believes Saudi Arabia and its allies have deployed a military force along the border which is large enough to launch a full-scale invasion, there was no indication that Riyadh was planning such a move soon.

Suspected al-Qaeda fighters stormed a military base in the port town of Mukalla, killing at least five soldiers and ransacking its ammunition store, residents said.

The attack came a day after the militants broke into Mukalla jail and freed scores of prisoners including a prominent local al-Qaeda leader, identified by officials as Khaled Batarfi.

The Sunni Islamist al-Qaeda fighters are ideologically opposed to the Houthis, who are drawn from a Zaidi Shi’ite minority, but coalition spokesman Asseri said it was Houthi fighters who broke open the jail in an effort to create chaos.

Al-Qaeda and the Houthis “have the same objective, they are in the same trench against the Yemeni population”, he said.