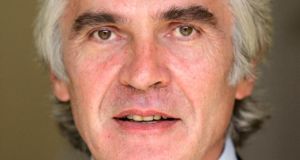 
A delegation from the Royal College of Surgeons in Ireland (RCSI) will travel to Bahrain next week to meet government officials following the resignation of its Bahrain campus’s president over the cancellation of a conference on medical ethics he helped organise.

The delegation, which will include the RCSI’s president, Prof Patrick Broe, and its chief executive, Prof Cathal Kelly, will also meet staff and students at the RCSI facility.

The RCSI, whose investment in Bahrain amounts to €70 million, declined to comment on Bahraini media reports that claimed the purpose of the visit was to “apologise to officials for the practises

” of RCSI Bahrain president Prof Tom Collins, who was accused of “utter lies” by the kingdom’s information minister earlier this week.

The Gulf Daily News reported “the RCSI’s action . . . is out of its keenness to maintain good relations with Bahrain”.

Medical charity Médecins Sans Frontières (MSF) had teamed up with the RCSI to organise a two-day conference to examine “medical ethics and dilemmas in situations of political discord or violence”. Prof Collins had been centrally involved in planning the event, due to take place on April 10th.

According to Dr Bart Janssens, director of operations at MSF, the Bahraini authorities gave written permission for the conference in December but since then “the clear message” was that it should not go ahead. Prof Collins told staff and students he was stepping down in protest.

The theme of the conference appears to have struck a nerve in Bahrain, given the continuing fallout from the rounding up of scores of medics in early 2011 as Bahraini security forces tried to snuff out pro-democracy protests.

Three of those detained had trained at the RCSI in Dublin. The college was criticised for its failure to take a public stand against the crackdown.

The RCSI earlier said Prof Collins had agreed to remain “to allow an effective transition”.

It is understood Prof Collins decided since then to leave his post with immediate effect. He could not be reached for comment last night.