The unified Jabhat and Isis may boast 30,000 fighters – a threat to Baghdad 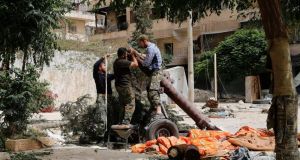 After more than a year of rivalry and six months of bitter fighting, the oath was declared at the Syrian town of Abu Kamal on the border opposite the strategic Iraqi town of al-Qaim captured this week by Isis.

The union of the two most powerful radical jihadi groups could double to 30,000 the number of available fighters and boost the two-week Isis offensive in Iraq. Isis fighters based in Syria could redeploy to Iraq, while the Jabhat could hold Isis-occupied territory in northern and eastern Syria.

The merger could, however, gratify Pakistan-based al-Qaeda central’s leader Ayman al-Zawahiri who has urged the two groups to cease hostilities and co-operate. Since he had expelled Isis from al-Qaeda’s ranks because of hostilities with the Jabhat, Zawahiri can be expected to welcome the Isis back into the fold.

The unexpected success of the Isis offensive in Iraq may have prompted Jabhat leader Abu Mohamed al-Golani to capitulate to Isis chief Abu Bakr al-Baghdadi whose April 2013 proposal of a merger was rejected.

Recruits are said to be flocking to Isis, many of them defectors from other groups drawn by Isis wealth from sales of Syrian oil to Turkey, extortion, ransom, bank robberies, and control over Mosul’s oil fields. Eighty per cent of foreign fighters have joined Isis in recent weeks.

A second factor forcing the merger is the Jabhat has suffered greater losses in recent fighting with the Isis. The Observatory says clashes in the eastern Syrian province of Deir al-Zor over the past six weeks have killed more than 600 fighters, 354 from Jabhat al-Nusra and 241 from Isis. Thirty-nine civilians have also died and 130,000 have been driven from their homes. More than 6,000 fighters been slain in inter-insurgent warfare since January.

In spite of the Isis surge in Iraq, Prime Minister Nuri al-Maliki has refused to consider forming a national emergency government. “The call to form [such] a government is a coup against the constitution and the political process,” he stated.

His bloc won the most seats in the April parliamentary election and he secured more votes than any candidate. He is, however, blamed for the failure of the Iraqi army to parry the Isis assault, for alienating Sunnis who now support Isis and is under pressure to stand down as parliament debates forming a new government.