Proposals would lead to ‘prolonging and maintaining the occupation’, says official 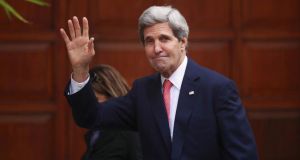 US secretary of state John Kerry: played down reports that the peace negotiations were faltering, saying some progress had been achieved. Photograph: Mohamad Torokman/Reuters

The Palestinians have rejected proposals presented by US secretary of state John Kerry for security arrangements in the West Bank following a creation of an independent Palestinian state.

A Palestinian official, who spoke on condition of anonymity and declined to elaborate on the proposals, said the Palestinian side rejected the American ideas “because they would only lead to prolonging and maintaining the occupation”.

Mr Kerry played down reports that the peace negotiations were faltering, saying some progress had been achieved.

“The interests are very similar, but there are questions of sovereignty; questions of respect and dignity, which are obviously significant to the Palestinians and Israelis; very serious questions of security and also of longer term issues of how we end this conflict once and for all.”

Mr Kerry raised the possibility of returning to the region in a week to resume discussions.

All sides remained tight-lipped on the details of Mr Kerry’s proposals which came after the negotiations reached an impasse over Israel’s insistence that its troops remain on the Jordan River border between Jordan and a future independent West Bank Palestinian state.

A senior Israeli official said the safety of Israel depended on securing the eastern border of the West Bank. “No technological means or weapons that have been offered to us thus far by the Americans can replace a military presence by the Israeli army on the Jordan River.”

Palestinian negotiators rejected the idea of Israeli troops deploying in the West Bank after independence, arguing that it would undermine Palestinian sovereignty. After talks with Mr Netanyahu in Jerusalem, Mr Kerry acknowledged Israel’s concerns that handing over territory to form part of a Palestinian state could make it vulnerable to attack, but he pledged Washington’s “deep, deep commitment to the security of Israel, and the need to find a peace that recognises Israel as a Jewish state, that recognises Israel as a country that can defend itself, by itself.”

Interim agreement
Mr Kerry’s visit came on the foot of tension between Jerusalem and Washington over the interim agreement signed in Geneva limiting Iran’s nuclear enrichment in return for a limited easing of international sanctions.

Mr Netanyahu said Iran’s pursuit of a nuclear weapons capability was a danger to the world. “I have expressed my concern since Geneva that the sanctions would begin to unravel, and I think steps must be taken to prevent further erosion of sanctions.”