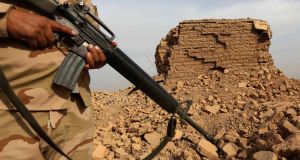 A soldier stands guard by the ruins of the archaeological site of Nimrud, about 30km south of Mosul, which was recaptured from Islamic State in November. Photograph: Safin Hamed/AFP/Getty Images

The first step towards restoring ancient Nimrud, in northern Iraq, is under way after the Islamic State group bulldozed and bombed the capital city of one of the world’s first empires.

Nimrud was founded more than 3,300 years ago, 20km southeast of Mosul, close to what is now the Islamic State stronghold of Mosul. It was the capital of the powerful Assyrian empire between 879-709 BC.

Covering some 3.5sq km, on an elevated plateau, it included the palaces and tombs of Assyrian kings, temples to their gods, statues of winged bulls as well as tablets and frescoes covered in cuneiform writing – one of the world’s first written languages, now extinct.

The Islamic State group, also known as Isis, swept through northern Iraq in the summer of 2014, capturing vast swathes of territory from an Iraqi army on the run.

Months later, videos began to emerge of Islamic State fighters taking sledgehammers, electric kango hammers and angle grinders to the ancient stone artefacts. They bulldozed the area and ultimately blew it up. The group deliberately destroys cultural heritage in areas it controls denouncing pre-Islamic art and architecture as idolatrous.

Piles of rubble litter the area. Statues of lions and winged bulls have been dismembered. Cuneiform script can still be seen on ancient stone tablets chiselled to pieces.

A mound of earth is all that remains of a 140ft high, rectangular stepped tower, known as a ziggurat. Satellite imagery suggests the ziggurat was bulldozed weeks before Islamic State were driven out of the area in October.

The United Nations culture body, Unesco, called Islamic State’s destruction of Nimrud a “war crime” stating that the group was “clearly determined to wipe out all traces of the history of Iraq’s people”.

Estimates of the damage to Nimrud vary because it has yet to be completely assessed. The area is still considered dangerous for workers and has been guarded by armed militiamen since it was recaptured in October.

The Unesco Office for Iraq is erecting a fence around Nimrud to protect it from looters and so that archaeologists and conservators can move in. The UN heritage body is also producing aerial imaging of the archaeological site.

Mohammed Sayeed, from a nearby village, has been working on-site for 20 years with various teams “before Saddam and after Saddam”, he says, referring to the fall of the former regime in 2003 – year zero for modern Iraq.

Nimrud is “part of me”, Sayeed says. “After the explosion, I didn’t come out [of my house] for three days. I couldn’t look at it, I couldn’t accept it. I felt very, very bad.”

“I have worked for a long time here,” he says, exploring, excavating and guarding the site from looters as well.

“At first Isis brought a bulldozer and heavy tools. Then they used bombs.”

Sayeed says Islamic State were motivated by something other than pure destruction. As well as the artefacts, Islamic State “tried to erase all the documents, all the records” so that in a criminal investigation nobody would know what was taken away – and sold on the black market – and what was destroyed.

“Isis took artefacts away to sell. The people who bought these artefacts don’t want the government to know.”

“That’s why they exploded [Nimrud]” – to confuse the authorities investigating what was lost, he says.

They don’t know how many artefacts were taken to be sold on the black market, he says, or how many were destroyed.

Nimrud is restorable, but it will take a lot of time. I estimate it could take 10 years just to rebuild it again

Sayeed’s younger colleague, Fateh, also from the local area, points to the earthy mound where Nimrud’s ziggurat once stood. He says Islamic State removed something very large from the ground using a mechanical digger it was that big.

“They took something big but we don’t know what,” Fateh says.

Sayeed could not say what percentage of ancient Nimrud could be restored because he worked in the “finding of pieces” not restoring them.

“I even know where there is a winged bull. I know all about this place,” including “the secret stuff,” Sayeed claims.

Layla Salih, head of the Ninevah’s state-run heritage department, puts the overall damage to Nimrud at 65 per cent.

Referring to Islamic State as Daesh – an Arabic acronym which means a bigot who imposes his views on others – Salih says “Daesh, they bulldozed it [the ziggurat] and put a lot of mines in it also.”

“Nimrud is restorable, but it will take a lot of time. I estimate it could take 10 years just to rebuild it again. But it also depends on the funds and the plans.”

“The Unesco project is to put a fence around Nimrud to protect it and to provide some sort of protection for guides and archaeologists who will work there.

“The fencing of Nimrud is being carried out under a conservation project funded by the government of Japan.”

Salih says a number of people are being trained in the Iraqi Institute for Conservation of Antiquities and Heritage in Erbil for reconstruction and restoration work. She hopes work will start soon.

“Daesh destroyed a lot of heritage buildings,” she says. “I have a lot to do in the future.”