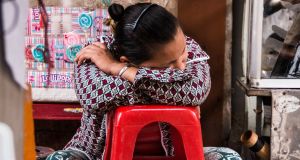 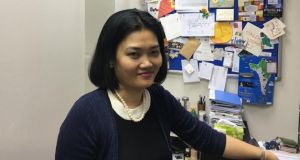 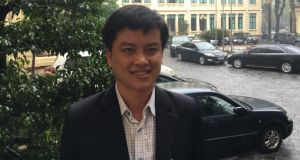 In AD 40, the warrior sisters Trung Trac and Trung Nhi led a host that defeated the Han Chinese dynasty trying to dominate Vietnam. Two thousand years later, a headstone in Truong Son cemetery remembers Phan Thi Lan, a 20-year-old killed on the Ho Chi Minh trail in 1972 during the conflict known as the American War.

After the United States fled Saigon in 1975, women rebuilt a country that had lost three million young men. All over the country there are testaments to the achievements of Vietnam’s women.

Today, women in Vietnam face a different battle, against thousands of years of Confucian tradition that places women below men in the social hierarchy. This is a global problem, and Vietnam has made great advances in raising the status of women through legislation, but still they are left with the main burden of unpaid care work, such as cooking, cleaning and childcare.

“It is taken for granted that unpaid care work is a woman’s job. ‘I’m a man so I don’t need to do these nitty-gritty things, I need to take care of big things,’” says Hoang Phuong Thao, country director of ActionAid Vietnam.

A compassionate advocate, Thao herself is the daughter of veterans of the American War, which came soon after fighting the French and was followed by a bitter fight against China, none of whom managed to defeat Vietnam.

“Our programme and partnership is a strong confirmation that unless we work on women’s rights, poverty and injustice will never be eradicated. Unless unpaid care work is shared and acknowledged, more and more women will be poor, not having time for paid work or education. It’s a strong message for us,” says Thao.

Even sophisticated Hanoi, the ancient and restored capital which bears many elegant architectural and culinary traces of French colonial times but has an energy that is entirely contemporary Vietnam, has similar issues to the rest of the country when it comes to unpaid care work.

Two-thirds of people living in poverty in the world are women, and recognising women’s contribution through unpaid care work is central to improving the lives of millions in Vietnam, Thao says at ActionAid’s headquarters in Hanoi.

In most parts of the world, for families to function, women do most of the unpaid care work or “no-name work”, while men spend more time working for money.

Irish Aid, working with ActionAid Vietnam, has co-funded a policy document called Make a House Become a Home, conducted in nine cities and provinces in Vietnam.

“Part of the problem is there is no real word in Vietnamese for feminism,” says Thao.

All power flows through the Communist Party, so any feminist “movements” are suppressed. Rebuilding Vietnam after the war has been a priority but changing work patterns and industrialisation have seen more women taking part in the workforce.

Vietnam has been one of the best-performing economies in Southeast Asia, with expansion driven by exports of low-end manufactured goods, from Gap shirts to Nike sneakers to smartphones.

One of the figureheads of the country’s economic rise is Vietnam’s first woman billionaire, Nguyen Phuong Thao, chief executive of VietJet, a budget airline that features young, bikini-clad women as flight attendants dancing for the passengers

Vietnamese people are eager to share in the benefits of an improving economy, and everyone pitches in whether it’s travelling to the cities to work in the factories or setting up a stall selling glutinous rice on the road circling Hoan Kiem Lake.

The report breaks down the different contributions made by men and women in Vietnam. Men have 76 minutes more each day to spend on entertainment and socialising than women, and on average, women spend five hours every day doing unpaid care work, which is two hours more than men.

“If the government takes a serious look at how the labour market is being affected by automation and migration and home care, those three aspects will certainly change the whole labour market,” says Thao.

“If unpaid care work is recognised in Vietnam, then the whole understanding about GDP and how it relates is changed,” says Thao. In 2015, unpaid work contributed more than 20 per cent of GDP in Vietnam.

Recognising unpaid care work would mean a big improvement in budget allocation for public services like education and healthcare and transportation.

“We are quite lonely in this struggle as we are the only NGO working on this and we are grateful for Irish Aid in helping us,” she says.

One of the figureheads of the country’s economic rise is Vietnam’s first woman billionaire, Nguyen Phuong Thao, chief executive of VietJet, a budget airline that features young, bikini-clad women as flight attendants dancing for the passengers. Revenue rose 39 per cent last year.

And yet, far away from the cabin-crew women in their underwear, on the streets of Hanoi, there has been a major crackdown on street vendors, aimed at stopping stalls selling steamed glutinous rice, croissants or coffee spilling out on to the pavement and spoiling the city’s image.

Many of the operators of these stalls are women, and they face the brunt of the crackdown.

About 19 per cent of delegates to the country’s parliament are women, down from 24 per cent, and female participation in education also needs to be boosted.

“The root cause is not addressed. It’s just a matter of numbers. Because if we have about 50 per cent of girls going to school at primary, that will stay at 30 per cent in high school and about 10 per cent will get to university. We can see it very clearly,” says Thao.

Le Khanh Luong, deputy director general of the gender equality department at the ministry of labour, invalid and social affairs, acknowledges the challenges of tradition and culture in raising the status of women.

“The man is always head of the family and the woman takes care of the family most of the time, this is a woman’s job, not a man’s job. Therefore there is discrimination between men and women in society and there are separate jobs for women and men,” said Luong.

Walking through the ministry building, a stunning ochre-coloured French colonial edifice, Luong says the research done in the report, combined with the government’s own work, has been supportive in efforts to improve public services and lessen the burden on women.

“This can mean improving water provision, so women don’t have to pick up water in the village, or introducing kindergartens or services for the elderly. There are policies introducing paternity leave and also to provide domestic help,” said Luong.

Despite the challenges, Thao remains optimistic, mostly because she sees signs of hope in the next generation.

“I am quite optimistic because I am a woman and I see the changes and I see my two daughters already challenging their father on this. It’s not just automatic that unpaid care work is a woman’s role. But in some areas I am quite pessimistic because the response is slow by the government. I am mixed,” says Thao.

This article was supported by a grant from the Simon Cumbers Media Fund.