Nasrin Sotoudeh: ‘The only thing I want is to put an end to arrests’

Despite fears for her safety in Iran, the former political prisoner feels she ‘cannot stay silent’ 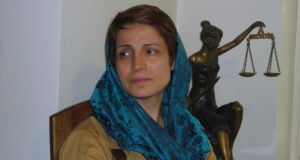 Human rights lawyer Nasrin Sotoudeh was held for three years in Evin prison and released after Iranian president Hassan Rouhani’s election. She keeps a statue of the goddess of justice in her Tehran office. Photograph: Lara Marlowe

“When I was in prison, I remembered the prison I visited in Ireland,” says Nasrin Sotoudeh (50), an Iranian human rights lawyer whose 2010-2013 imprisonment became a cause célèbre. “It helped me to tolerate my captivity.”

Sotoudeh visited Ireland in 2007, at the invitation of the Nobel Women’s Initiative. “The prison had been turned into a museum, and the cells were named for the Irish freedom fighters who were held there.

“I saw the cell where Bobby Sands lived. And I thought, ‘Maybe some day Evin Prison will be a museum, and there will be a cell with my name.’ It gave me courage.”

Sotoudeh, a laureate of the EU’s Sakharov Prize, is a petite woman with a soft voice, engaging smile and enormous courage. She was held in ward 209, reserved for political prisoners, after her conviction for “acting against national security” and “propaganda against the regime”.

Sotoudeh and her husband Reza Khandan, a graphic designer, are still banned from leaving Iran. Their apartment was broken into shortly after her release, and he has been physically threatened. Is she worried that hardliners will hurt her or her family? She pauses. “Of course I am. But I cannot stay silent for this reason.”

Sotoudeh started her first hunger strike after the intelligence police took the diary she had kept after the birth of her son Nima, now 11. The last was prompted by the travel ban imposed on her daughter Mehraveh, now 15.

“My first hunger strike, I drank only water,” Sotoudeh recalls. “I knew the last one might go on a long time, because they would not easily meet my demands. So I ate two dates a day, and a cup of milk every second day. Towards the end, I was semiconscious and had impaired vision. I knew I risked permanent damage, but I was very desperate.”

By chance, Iranian newspaper Bahar serialised the memoirs of Bobby Sands during Sotoudeh’s last hunger strike, and she read them in her cell. After her release, she was asked to write a preface for the book version. “Gerry Adams had written a preface. I wrote a second preface, telling how I read the memoirs in Evin. Unfortunately, my preface was censored by the ministry of culture.”

Many of the reformers who were active during the 1997-2005 presidency of Mohammad Khatami have left Iran, including philosophers Mohsen Kadivar and Abdol Karim Soroush, former culture minister Ata’ollah Mohajerani, and investigative journalist Akbar Ganji. The revolution, it seems, has not stopped devouring its own children. Even Shirin Ebadi, the intrepid human rights lawyer and Nobel laureate, now lives in London.

“As an Iranian, I respect the choice they made to emigrate,” Sotoudeh says. “Wherever they are, they are working for the sake of this Iran. But it would have been better for the country if they had stayed and fought. I will never leave.”

The Iranian Bar Association has allowed Sotoudeh to resume her practice. She is defending cases involving members of the Baha’i faith, political prisoners and children under the age of 18 charged with capital offences.

Iran’s treatment of the Baha’i is one of the most sensitive subjects in the country. Because they were founded after Islam, they are considered a “deviant sect”. The fact that Baha’is occupied prominent positions under the shah, and that their headquarters are in Haifa, Israel, feed the regime’s suspicions. According to a UN report on human rights in Iran, 136 Baha’is were in prison as of last January.

There were 10 Baha’i women in ward 209 with Sotoudeh. “I became close friends with one of them, Mahvash Shahriari,” she says.

Shahriari is one of seven Baha’i leaders who were sentenced to 20 years in prison in 2008. She had been barred from teaching since the revolution. “We spent a lot of time together, reading and discussing books. One was about the Protestant reformation.”

Reformist intellectuals believe Iran’s brand of revolutionary Islam is ripe for a reformation.

“President [Hassan] Rouhani’s election has made Iranian society a little freer,” Sotoudeh says. “On the other hand, the number of executions has shot up. The judiciary is still in the hands of the hardliners, and they want to show their power.”

Some 20 political prisoners were freed at the same time as Sotoudeh. But new prisoners have been taken. At a press conference on June 14th, Rouhani promised to look into the arrest of Sabah Azar Peyk, an independent journalist who covered parliament.

“No one knows why she was arrested, because she’s in ward 209, and when someone is in 209, it’s very difficult to get information,” Sotoudeh says.

A bronze statue of a goddess holding the scales of justice stands in Sotoudeh’s office. It was a gift from the signatories of a petition demanding an end to gender discrimination, most of whom were arrested in 2007. Sotoudeh defended them.