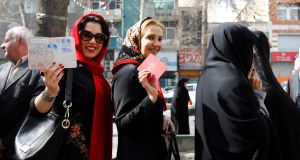 Iranian women show their IDs as they wait in line to cast their votes in the parliamentary and Assemblyof Experts election outside a polling station at Ershad Mosque in Tehran, on Friday. Photograph: Abedin Taherkenareh/EPA 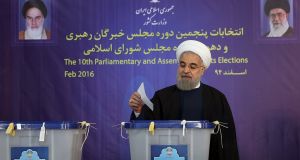 Iran’s president Hassan Rouhani casts his vote during elections for the parliament and Assembly of Experts, in Tehran on Friday. Photograph: Reuters

Millions of Iranians voted in high-stake elections on Friday that could shift the balance of power within the hardline-controlled Islamic elite by ushering in a reformist comeback or help conservatives tighten their grip on power.

The contest is seen by some analysts as a make-or-break moment that could shape the future for the next generation, in a country where nearly 60 per cent of the 80 million population is under 30.

Participation appeared enthusiastic and relaxed in the first polls since a nuclear deal last year led to a lifting of sanctions and deeper diplomatic engagement abroad.

Authorities extended voting three times for a total of four hours until 10 pm., citing a rush of people wanting to cast their ballot. First partial results are not expected until Saturday and a clear outcome may take days to emerge.

There were long queues at polling stations in the capital, and state television said voting booths in many other cities were still packed with people in mid-evening.

“Whoever likes Iran and its dignity, greatness and glory should vote. Iran has enemies. They are eyeing us greedily,” supreme leader Ayatollah Ali Khamenei said after casting his ballot, in a reference to Western powers.

“Turnout in the elections should be so high to disappoint our enemies ... People should be observant and vote with open eyes and should vote wisely.”

At stake is control of the 290-seat parliament and the 88-member Assembly of Experts, the body that has the power to appoint and dismiss the supreme leader, Iran’s most powerful figure. Both are currently in the hands of hardliners.

During its next eight-year term it could name the successor to Khamenei, who is 76 and has been in power since 1989.

Control of parliament will influence the ability of moderate President Hassan Rouhani, constrained so far, to deliver on his promises of greater freedoms and economic reforms – as well as his own chances of re-election next year.

The Guardian Council, appointed half by the supreme leader and half by the ultra-conservative judiciary, disqualified thousands of candidates for the legislature and vetoed 80 per cent of those seeking election to the Assembly of Experts. They included Hassan Khomeini, the moderate grandson of Ayatollah Ruhollah Khomeini, the leader of Iran’s 1979 Islamic revolution and Khamenei’s predecessor.

As the day went on, Iranians waited patiently in long lines outside polling stations to cast ballots, with whole families coming together with their young children.

Responses from voters at polling stations in Tehran showed how polarised the country is between conservatives who want to preserve the austere ideals of the Islamic revolution from foreign influence, and moderates or reformists who want a faster opening to the world and better prospects for their children in the wake of the nuclear deal.

Sayed Ehsan (30) a physician, said that under the conservatives Iran would avoid dependence on America.

“I don’t agree with having close relations with the West or making changes ... as the left side (reformists) want. They will take the country to civil war. They want to change the power structure, this change will have a heavy cost for the country.”

Mohammed Reza, a 23-year-old electric engineer, said he was voting for the reformists because he wanted change. “I don’t need money, I don’t need a job, what I need is freedom. I need an Iran that is open to the world,” he said.

Askar Jaafarzad (29), a pro-reformist, said he had graduated as a vet but could not find work. He works as a flight attendant and when off duty drives a cab to pay his house loan. “Every young person in this country will vote for the reformists because they want jobs and a more decent life,” he said.

Supporters of Mr Rouhani, who championed the nuclear deal and is likely to seek a second presidential term, are pitted against hardlines deeply opposed to detente with the West.

While reformists saw a high turnout as an opportunity for change, conservatives said it showed widespread popular support for the Islamic Republic’s political system – and perhaps by extension the status quo.

“Each vote of the people is like a shot being fired toward global arrogance,” said Mohammad Reza Naghdi, the head of the Basij militia, according to Fars News. “A shot that shows the strength and greatness of the Iranian people without a doubt.”

Political analysts cautioned that any change would be slow, incremental and subject to setbacks.

“The choice Iranians have is between revolutionary hardliners, pragmatic hardliners, and meek reformists,” Karim Sadjadpour of the Washington-based Carnegie Endowment for International Peace told Reuters.

“If you live in Iran these distinctions can make a difference in your daily life. But for Washington the clearest takeaway is that the Supreme Leader and Revolutionary Guards continue to be firmly entrenched.”

The interior ministry said on Wednesday that all Iranians would be able to vote in the elections.

Opposition cleric Mehdi Karroubi, who had made known his wish to vote for the first time since being put under house arrest in 2011, was not able to cast his ballot by the end of regular voting hours, his son told Reuters.

But in a statement carried by the Kaleme website, Karroubi said: “High turnout of people showed that tactics like mass disqualification of reformers had no effect.”

Mr Karroubi and fellow reformist Mirhossein Mousavi, both in their 70s, ran in the 2009 election and are figureheads for many Iranians who protested against a contest they believe was rigged to make President Mahmoud Ahmadinejad the official winner.

Influential former president Ayatollah Akbar Hashemi Rafsanjani, allied to Rouhani, said Iranians knew this was a day of destiny, comparing it to “Laylat al-Qadr”, the “night of destiny” in which Muslims believe the first verses of the Koran were revealed to the Prophet Muhammad.

Asked what would happen if reformists did not win, he told Reuters: “It will be a major loss for the Iranian nation.” Mr Rafsanjani called on election authorities to protect people’s votes, saying “you should show our people that their votes will be preserved and are in safe hands.”

Foreign minister Mohammad Javad Zarif, who led nuclear talks with world powers, told Reuters while voting at the Jamaran mosque in northern Tehran that Iranians would continue to support policies that brought about the nuclear deal.

“The message to the international community from this election is the Iranians are solidly behind their government,” he said. “They will continue to support the policies that have been adopted leading to the conclusion and successful implementation of the nuclear deal and this will continue.”

Supporters of the reformist and moderate candidates barred by the Guardian Council have called on voters to back Rouhani’s allies and keep the conservatives out.

If the experts’ assembly is called on to choose a successor to Khamenei, its decision could set the Islamic Republic’s course for years or even decades to come.

Mistrust of the West is deep, and hardliners have sought to weaken Rouhani’s allies by accusing them of ties to the West.

Whatever the outcome, though, Iran’s political system places significant power in the hands of the supreme leader, who heads a conservative establishment including the Guardian Council, the judiciary, the Revolutionary Guards and state media.

Vote counting started on Friday evening and some small constituencies could declare on Saturday morning, an electoral official said. Full results are expected early next week.

But it could take longer to get a clear picture of who has come out on top, as the numerous small parties and independent candidates form alliances and declare their allegiance.