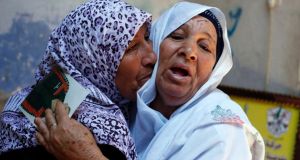 The mother (R) of Palestinian Ateya Abu Moussa, who has been held prisoner by Israel for 20 years, reacts as she is hugged by her sister after hearing news on the possible release of her son. Abu Moussa was expected to be among more than 100 Arab prisoners to be released as a step to renew stalled peace talks with the Palestinians in Washington today. Photograph: Reuters

Israeli and Palestinian negotiators will resume peace talks today, the US State Department said in a statement.

It will be the first time that the two have held direct talks since 2010. Clearing the last obstacle to resuming peace talks, the Israeli Cabinet voted yesterday to approve the release of 104 Palestinian prisoners, an unpopular move with many Israelis.

US Secretary of State John Kerry then spoke with Mahmoud Abbas, the president of the Palestinian Authority, and Israeli prime minister Benjamin Netanyahu of Israel to formally invite them to send their negotiating teams to Washington.

“Both leaders have demonstrated a willingness to make difficult decisions that have been instrumental in getting to this point,” Mr Kerry said in a statement. “We are grateful for their leadership.”

The goal of the negotiations will be to establish a Palestinian state alongside Israel with agreed-upon borders and security arrangements.

Officials said that talks are initially expected to focus on procedural issues, like the location, schedule and format of negotiating sessions, before moving on to tackle the core issues of the Israeli-Palestinian conflict.

The Israeli side will be represented by Israel’s justice minister, Tzipi Livni, and Isaac Molho, Mr Netanyahu’s special envoy.

On the Palestinian side will be Saeb Erekat, the chief negotiator, and Mohammed Shtayyeh, a close adviser to Mr Abbas. Thesession this evenign will be a working dinner at the State Department, hosted by Mr Kerry, who has made an intensive effort to revive the moribund talks. The Israeli and Palestinian negotiating teams are to meet again tomorrow before heading home.

The next round of talks would be held in the Middle East.

1 Why Sinn Féin will not call the State by its name
2 McDonald rejects idea SF public meetings ‘an affront to democracy’
3 Coronavirus: Questions over Ireland’s readiness for what might come
4 Coronavirus: Irish citizens advised not to travel to Italy’s affected areas
5 Shannon floods: ‘The only way they will get me out of my home is in a box’
Real news has value SUBSCRIBE