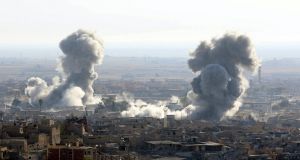 Smoke rises from the site of US-led air strikes in the town of Sinjar, Iraq. Photograph: Ari Jalal/Reuters

Kurdish forces backed by US air strikes have seized the northern Iraqi town of Sinjar from Islamic State (IS), giving the jihadists’ opponents an important strategic victory.

The recapture of Sinjar, located on the main supply road between IS-held cities in Syria and Iraq, could help open the path to Mosul, whose sudden seizure last year prompted IS to declare a caliphate.

The Islamists’ systematic killing and enslaving of thousands of Sinjar’s Yazidi residents as they swept across northern Iraq last summer drew global outrage and prompted the US to intensify its campaign against IS.

The loss of Sinjar on Friday coincided with reports that a US air strike had killed Mohammed Emwazi, a British citizen who had appeared in videos showing the beheading of western hostages.

The US said it was “reasonably certain” that it killed the militant, known as “Jihadi John”, in the drone strike on a vehicle near Raqqa, IS’s de facto capital in Syria.

If confirmed, the killing would give IS opponents a psychological boost and point to sophisticated US intelligence in IS-occupied territory in Syria.

Iraqi Kurdish regional president Massoud Barzani declared “the liberation of Sinjar” after Peshmerga forces and fighters affiliated with the Kurdistan Workers’ Party, both of which include Yazidis, entered the town on Friday after cutting it off from east and west.

Mr Barzani said the offensive could provide critical momentum in efforts to capture the western provincial capital Ramadi and the IS bastion of Mosul in the north.

The loss of Sinjar was the second significant battlefield reversal for IS this week, after troops loyal to Syrian president Bashar al-Assad, backed by Hizbullah and Russian air strikes, broke a two-year IS siege on the Kweiris military base in Aleppo.

IS also provided reminders of its reach. On Friday it claimed responsibility for Thursday’s bombing of the Beirut suburb of Bourj al-Barajneh, which killed 43 people, as well as a suicide bombing that killed 18 mourners at the funeral of a pro-government Shia fighter in Baghdad.