Kerry voices concern about crackdown on Brotherhood in Egypt 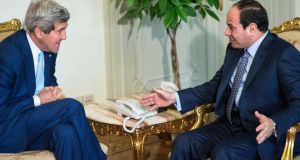 Egypt’s president Abdel Fattah al-Sisi (right) and US secretary of state John Kerry in conversation before a meeting at the presidential palace in Cairo. Photograph: Brendan Smialowski/Reuters

US secretary of state John Kerry held talks yesterday with president Abdel Fattah al-Sisi in Cairo over concerns about Egypt’s crackdown on the Muslim Brotherhood and the threat that the conflict in Iraq poses to the Middle East.

Mr Kerry is the highest-ranking US official to visit Egypt since Mr Sisi, the former military leader who toppled Islamist president Mohamed Morsi after mass protests last year, won a presidential election in May.

His visit comes a day after an Egyptian court confirmed death sentences against 183 members of Morsi’s Muslim Brotherhood, including its leader Mohamed Badie, in a mass trial.

The Obama administration has said it looks forward to working with Mr Sisi’s government but expressed concerns over widespread human rights abuses and limits on freedom of expression.

“This is a critical moment of transition in Egypt [and] enormous challenges,” said Mr Kerry before an earlier meeting with Egypt’s foreign minister Sameh Shukri. “There are issues of concern . . . but we know how to work at these.”

Mr Shukri told his US counterpart that the relationship between the US and Egypt should be based on “mutual respect . . . with no interference in internal affairs”, according to the foreign ministry.

A senior US state department official said Washington was worried about the use of heavy-handed political and security tactics by Egypt’s authorities, which he said was polarising Egyptian society.

The US froze some of its $1.3 billion (€960 million) in annual military aid to Egypt following Mr Morsi’s overthrow. About $575 million in suspended funds have been released over the past 10 days and will be used to pay existing defence contracts, said the state department official.

Washington has also said it will provide 10 Apache attack helicopters to help soldiers battling militants in the Sinai peninsula. – (Reuters)