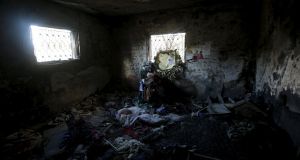 Members of a “Jewish terror group” have been arrested over a July arson attack on a Palestinian home in the Israeli-occupied West Bank that killed a child and his parents, Israeli police said yesterday.

A police statement did not say how many suspects were in custody. It said a court order banning disclosure of their names and other details of the case was in effect.

Eighteen-month-old Ali Dawabsheh was killed in the July 31st blaze in Duma, a village outside Nablus. His father, Saad Dawabsheh, succumbed to injuries suffered in the fire on August 9th, and the boy’s mother, Riham, died in hospital four weeks later. Ali’s four-year-old brother remains in hospital.

Palestinian anger over the Duma attack has been a factor fuelling a wave of street assaults on Israelis that erupted on October 1st.

“An aggressive, violent investigation is being held in order to extract confessions. The suspects are being hidden away, they have not been brought before the courts and their lawyers and families have not been allowed to see them,” Haber said.

Police spokesman Micky Rosenfeld denied there had been any abuses, saying the suspects were being held in accordance with the law.

The Tel Aviv hospital treating Ahmed Dawabsheh denied Palestinian health ministry allegation that there had been a demand for the Palestinians to pay the hospital bill.

1 Covid-19 incidence in the Republic set to surpass that of UK
2 Coronavirus: Non-essential travel from US set to be banned within days
3 ‘Our hearts are broken’ – implications of fresh lockdown sink in
4 German nudist chases wild boar that stole laptop at Berlin lake
5 Taoiseach tested twice for Covid-19 but excused quarantine after Brussels trip
Real news has value SUBSCRIBE