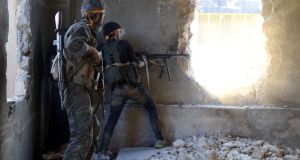 Insurgent fighters fire towards positions of regime forces in Ramousah on the southwestern edges of Syria’s northern city of Aleppo on Saturday. Photograph: Fadi Aa-Halabi/AFP/Getty Images

Syrian insurgents who broke the siege of rebel-held eastern Aleppo on Saturday in a significant territorial gain came under intense air attack from pro-government forces on Sunday trying to repel the advance which also cut government-held Aleppo’s main supply route.

Rebels have taken most of a large government military complex southwest of Aleppo city in a major offensive begun on Friday to break a month-long siege and are now attacking further into government held territory.

The surprise advance in Ramousah allowed fighters from insurgent areas in western Syria to break through a strip of government-controlled territory on Saturday and connect with fighters in the encircled sector of eastern Aleppo.

But fierce fighting and continuous Russian and Syrian air strikes in and around the Ramousah area mean no safe passage for besieged east Aleppo residents has been established, activists and the Syrian Observatory for Human Rights said.

Fighters from a coalition of Islamist rebel groups called “Jaish al Fateh” announced the start of a new phase to liberate the whole of Aleppo, saying it pledged to increase the number of fighters for the battle it said will only end by hoisting their flag on the ancient Aleppo citadel in government hands.

They released video footage that showed huge flames of fire which they said were caused by white phosphorus bombs dropped on the city.

Syrian president Bashar al-Assad wants to take full control of Aleppo, pre-war Syria’s most populous city, which has been divided between rebel and government-held areas.

Mr Assad’s government forces are supported in Syria by Russian air power, Iranian militias and fighters from Lebanon’s Hizbullah group who have sent reinforcements to shore up the army .

Rebel gains this weekend could change the balance of power in Aleppo, after Mr Assad said a siege by government and allied forces on rebel-held east Aleppo in early July was a prelude to re-taking the city. The loss of Aleppo would be a crushing blow for rebels.

“We have now seized full control of the Ramousah area . . . We are in our trenches but there are insane air strikes of unprecedented ferociousness. The regime is using cluster and vacuum bombs,” said Abu al Hasanien, a senior commander in Fateh Halab, the coalition of moderate rebel groups inside the city.

Pro-Syrian government news channels have mostly played down the rebel gains and say Syrian army efforts have caused rebels to withdraw from some recently-gained areas.

But Lebanese pro-Syrian government news channel al Mayadeen said late on Saturday the Syrian army had “withdrawn from a number of positions southwest of Aleppo and repositioned itself in new defensive lines”.