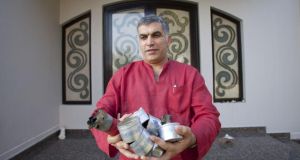 Nabeel Rajab outside his home in Manama last year, holding some of the teargas canisters that had been fired into his house. Photograph: Conor McCabe

Medical ethics is apparently too sensitive an issue to discuss in Bahrain following the cancelling of an international conference that was being organised by the Royal College of Surgeons of Ireland (RCSI ) and Médecins Sans Frontières. Hardly surprising given that the Bahraini government jails and tortures medical professionals and human rights defenders.

This week human rights organisations around the world are demonstrating in solidarity with Nabeel Rajab, director of the Bahrain Centre for Human Rights (BCHR), who is languishing in prison because he continued to speak out for the human rights of others in spite of threats and harassment. One of the cases Nabeel was very active on was the jailing, on fabricated charges, of medics who tended the wounded and told the truth about killings and torture during the uprising in Bahrain in 2011.

Just as the medics were tortured and jailed to try to cover up the brutal repression by the Bahraini government, Nabeel Rajab was also eventually imprisoned after an unfair trial in an effort to silence him and the BCHR. Last week he wrote to us from prison: “I urge you to walk the path to the end, to help us here in Bahrain and in the Gulf region to regain our rights to democracy and social justice. Tyrants of the Gulf region succeeded in silencing governments of the free world in return for short-sighted economic and financial gains. Petrodollars were able to silence the global media and prevent them from revealing our peoples’ sufferings.”

On Monday Médecins Sans Frontières announced the cancellation of a planned international conference on medical ethics which was scheduled to be held in the kingdom, with the participation of Prof Patrick Roe, the president of Royal College of Surgeons of Ireland and a consultant general surgeon at Beaumont Hospital in Dublin, Anastasia Crickley of the United Nations Committee on the Elimination of Racial Discrimination, and Baroness Nuala O’Loan, Northern Ireland ’s first police ombudsman from 2000 to 2007.

Prof Tom Collins, the president of the Bahrain campus of the RCSI, has reportedly resigned because of the denial of a permit for the conference. It is a pity that the RCSI did not feel strongly enough on the issue of medical ethics to speak out publicly when colleagues, some of whom had studied in Dublin, were being tortured in police custody in 2011.

Every so often there is a PR initiative from the Bahraini government side. In December last King Hamad made a speech to mark International Human Rights Day. The theme of the speech was “My voice counts” and in this speech the king affirmed “that he has listened to the people’s voice in launching the National Action Charter which gained public unanimity in a historic referendum”.

But the reality is that the government continues to jail those who raise their voices in defence of human rights. At this moment Dr Ali Al Ekri, Dr Saeed Al Samahiji and Ibrahim Al Demistani, a nurse, remain in prison having been convicted of “trying to overthrow the monarchy”, by treating injured demonstrators and speaking out about killings and torture.

At the same time another 20 medics and health professionals will find out today whether the charges of participating in illegal gatherings have been upheld against them. They face the possibility of receiving a three-month prison sentence, although in practice, many of them have already spent that time in prison awaiting trial. Even those medics who have been released or who have had charges against them dropped have been removed from their posts.

The government of Bahrain has employed some of the most expensive PR advisers and has launched numerous “reform” initiatives but has yet to seriously address the human rights situation. Jailing those who expose killings and torture is a failed strategy. Repression in Bahrain is not a secret. Medical ethics would best be served by releasing the medics from prison together with Nabeel Rajab and all those human rights defenders who have had the courage to speak truth to power.