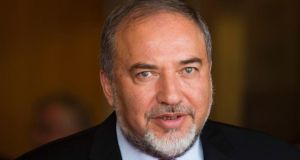 Israel’s foreign minister Avigdor Lieberman: members of his party are at the centre of allegations about the transfer of public funds. Photograph: Abir Sultan/EPA

With 2½ months before the March 17th vote, latest polls show prime minister Binyamin Netanyahu’s ruling Likud party and the new alliance of Labour , led by Yitzhak Herzog, and former justice minister Tzipi Livni, tied with a projected 24 seats each in the next 120-seat Knesset.

However, speculation over which party will be best-placed to cobble together a working coalition after the election has now become a lot more difficult.

On December 24th the police announced one of Israel’s biggest-ever corruption investigations with the arrests of dozens of politicians from Yisrael Beiteinu, the right-wing party led by Mr Lieberman, and other public officials.

The allegations involve the transfer of millions of euro of public funds to NGOs and local councils, assisted by Yisrael Beiteinu politicians, including a deputy minister and former minister, and middlemen, who are alleged to have received handsome kickbacks.

So far there are no indications that Mr Lieberman himself was involved, but the party has already plummeted in the polls from 13 projected seats to eight, and the downward spiral is likely to continue.

Mr Lieberman was expected to play a pivotal role in deciding who will be Israel’s next prime minister once the coalition negotiations get under way and there was speculation that this time the maverick politician would not back Mr Netanyahu.

Another key player in deciding who will be Israel’s next prime minister was thought to be Arieh Deri, head of the ultra-Orthodox Shas party, which had 11 seats in the outgoing Knesset. He dropped a bombshell on Monday, announcing he was quitting politics in a move that could spell the end of Shas.

The move followed publication of footage of the party’s former spiritual leader, Rabbi Ovadia Yossef, who died last year, criticising Mr Deri and praising his arch-rival Eli Yishai, who split from Shas recently to set up a rival party.

Shas’s leading rabbis have urged Mr Deri to continue as party leader and he may do so before the party lists are finalised next month. However, for now the resignation stands and the move has put a huge question mark over the future of Shas and the course of the entire election campaign.