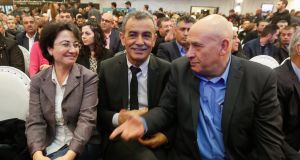 Israeli-Arab members of the Knesset Hanin Zoabi, Jamal Zahalka and Basel Ghattas: The three have been temporarily suspended from the Israeli parliament over a meeting they held last week with the families of Palestinians killed while attacking Israelis. Photograph: Atef Safadi/EPA

The ethics committee of Israel’s Knesset has temporarily suspended three Israeli-Arab politicians from parliament after determining that a meeting they held last week with the families of Palestinians killed by security forces after attacking Israelis constituted conduct unbecoming.

The three deputies – Hanin Zoabi, Basel Ghattas and Jamal Zahalka – from the predominantly Arab Joint List, insisted the meeting in east Jerusalem was a humanitarian gesture, aimed at hearing the families’ request for the Israeli authorities to return the bodies of their loved ones for burial.

The meeting, during which a minute’s silence was observed for the Palestinians killed, sparked a public outrage in Israel, coming after four months of almost daily attacks in which 30 Israelis have been killed. In the same period, Israeli forces have killed at least 156 Palestinians, 101 of them assailants, authorities say.

The ethics committee received more than 450 public complaints against the three Arab Knesset members, along with dozens of grievances filed by Knesset members, including prime minister Binyamin Netanyahu. Ms Zoabi and Mr Ghattas were suspended from the Knesset for four months each, while Mr Zahalka was suspended for two months, although all three will be able to participate in Knesset votes.

Mr Netanyahu said the three Knesset members had crossed a red line. “We will not tolerate a situation where MKs [members of the Knesset] support the families of individuals who murder Israeli citizens, observing a moment of silence in memory of those who kill our children,” he said. “I try to imagine what would happen in the British parliament if MPs were to observe a minute’s silence for Jihadi John.”

The Arab MKs heckled Mr Netanyahu, calling him “fascist” and “instigator” and Mr Zahalka was removed from the plenum by Knesset ushers.

In the wake of the affair, Mr Netanyahu drafted a Bill to suspend an MK with the backing of 90 of the 120 Knesset members, although it is unclear if this will muster a majority.

The Bill seeks to impose new regulations on Israeli nonprofit groups that receive funds from foreign governments or bodies such as the European Union, requiring NGOs to give details of overseas donations in all their official publications if more than half their funding comes from such entities.

The vote came despite a letter sent by 50 European parliament MPs to Knesset members, urging them to vote against it.