Some 1,500 fires break out since Tuesday, police estimate over half started deliberately 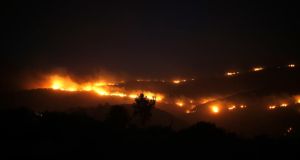 Fires on the horizon as firefighters battle a fire in the Israeli town of Nataf, west of the Arab Israeli town of Abu Ghosh, along the border with the occupied West Bank, November 25th, 2016. Photograph: Ahmad Gharabli/AFP/Getty Images 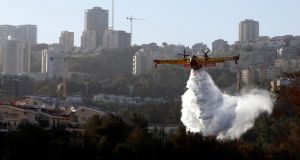 A firefighting plane drops fire-retardant over a wildfire in the northern city of Haifa, Israel, November 25th, 2016. Photograph: Baz Ratner/Reuters 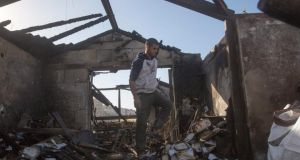 Israeli prime minister Binyamin Netanyahu has vowed that arsonists will be severely punished as firefighters battled fierce blazes across the country for the fourth consecutive day on Friday.

An extended period of dry autumn weather combined with strong winds fanned the flames and caused authorities to order the evacuation of some 80,000 residents from the northern port of Haifa, Israel’s third-largest city.

Some 1,500 fires have broken out since Tuesday and police estimated more than half were started deliberately. More than a dozen Israeli Arabs and Palestinians were arrested, suspected of starting fires or inciting arson.

Mr Netanyahu vowed the arsonists would pay a heavy price.

“Arson was definitely involved in some of the cases, but not all of them. Whether or not this was an organised phenomenon – that I can’t say,” he said. “Arson terrorism will come with a cost.”

Arab Knesset members accused the government and right-wing elements of taking advantage of the crisis to incite opinion against Israeli Arabs and Palestinians.

Despite the accusations, the Palestinian Authority sent eight West Bank fire engines to Haifa to join in the efforts to bring the blaze under control and two of Israel’s Arab neighbours, Jordan and Egypt, also sent firefighting helicopters and fire engines.

Haifa residents were told on Friday it was safe to return to their homes but with significant rain only forecast for next Thursday and the dry and windy conditions expected to continue, Israelis were bracing themselves for more fires over the next few days.

No one has been killed but more than 150 people were treated for smoke inhalation. Scores of homes have been destroyed and hundreds are damaged.

The entire community of Nataf near Jerusalem was evacuated on Friday for the second time in three days after a petrol bomb was thrown from a nearby Palestinian village.

Firefighters worked around the clock and army leave was cancelled as soldiers were sent to help efforts to extinguish the fires.

In 2010, more than 40 people were killed in a fierce blaze on the Carmel mountain range close to Haifa, prompting Israel to significantly improve its firefighting capabilities, but the scope of the current crisis is unprecedented.

Among those sending planes was Turkey, which only recently renewed diplomatic ties with Israel, and the US, which dispatched its 747 Supertanker, the largest aerial firefighting aircraft in the world.

The EU’s foreign policy chief, Federica Mogherini, says the EU stood by the people of Israel in their time of difficulty, not only in words but also in practical support.