Israeli foreign ministry spokesman says ‘such resolutions are not helpful’ 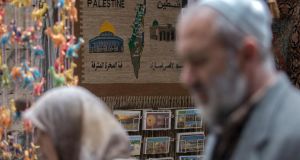 Palestinians pass a wall decoration for sales in the Moslem Quarter of the Old City in Jerusalem. Photograph: Jim Hollander/EPA

Israel has criticised the decision by the Government to accept a motion recognising the right of the Palestinian people to self-determination, warning that such moves only hinder peace prospects.

“Such resolutions are not helpful. They do not contribute to Palestinians returning to the negotiating table: on the contrary, they give the Palestinians the illusory feeling that via a unilateral strategy and parliamentary resolutions they can obtain their political aspirations,” foreign ministry spokesman Emanuel Nachshon told The Irish Times.

“The only way for the Palestinians to move forward is through direct negotiations with Israel.”

The Dáil looks set to call for recognition of the state of Palestine after the Government said it would not oppose the move. Such a vote by TDs would be symbolic, and not binding on the Government, but the initiative has drawn cross-party support.

Mr Nachshon expressed regret that the Irish Government did not agree with the Israeli perspective on the matter.

At the same he stressed that the “non-binding, symbolic” resolution would not harm Irish-Israeli bilateral ties or the ongoing dialogue between Israel and Irish members of parliament.

Ireland is the latest in a string of European nations taking this step. The French national assembly voted 339-151 in favor of urging its government to recognise a Palestinian state last week.

The Danish government will also vote on the issue in early January, while similar votes took place in the parliaments of Britain and Spain.

Sweden officially recognised Palestinian statehood, while votes by the other countries have been symbolic.

The Swedish move prompted Israel to briefly recall its ambassador from Stockholm.

A vote by the European parliament on the recognition of a Palestinian state is expected next week.

Israeli officials say Jerusalem is watching with concern the growing trend across Europe towards recognition of Palestinian statehood.

In a number of countries officials noted that a key factor was the increasing influence on policymakers of Muslim voters.