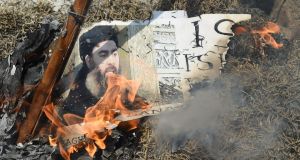 An audio message purporting to come from the spokesman of Islamic State called on followers to launch attacks in the United States, Europe, Russia, Australia, Iraq, Syria, Iran, and the Philippines during the Islamic holy month of Ramadan, which began in late May.

The audio clip was distributed on Monday on Islamic State’s channel on Telegram, an encrypted messaging application. It was attributed to the militant group’s official spokesman, Abi al-Hassan al-Muhajer.

The authenticity of the recording could not be independently verified, but the voice was the same as a previous audio message purported to be from the spokesman.

“O lions of Mosul, Raqqa, and Tal Afar, God bless those pure arms and bright faces, charge against the rejectionists and the apostates and fight them with the strength of one man,” said al-Muhajer. Rejectionist is a derogatory term used to refer to Shia Muslims.

“To the brethren of faith and belief in Europe, America, Russia, Australia, and others. Your brothers in your land have done well so take them as role models and do as they have done.”

Meanwhile, Iraqi forces on Tuesday reported progress in the US-backed campaign to dislodge Islamic State from Mosul, announcing the capture of a district just north the city’s historic centre.

With the loss of the Zanjili neighbourhood, the enclave still held by Islamic State in the northern Iraqi city has shrunk to two districts along the western banks of the Tigris river – the densely populated Old City centre and the Medical City.

Iraqi government forces retook eastern Mosul in January and began a new push on May 27th to capture the remaining enclave, where up to 200,000 people are trapped.

The Mosul offensive started in October with air and ground support from a US-led international coalition. It has taken much longer than expected as Islamic State is fighting in the middle of civilians, slowing the advance of the assailants.

The fall of Mosul would, in effect, mark the end of the Iraqi half of the “caliphate” declared in 2014 over parts of Iraq and Syria by Islamic State leader Abu Bakr al-Baghdadi, in a speech from a historic mosque in the old city.

In Syria, Kurdish forces backed by US-air strikes are besieging Islamic State forces in the city of Raqqa, the militants’ de facto capital in that country.

About 800,000 people, more than one-third of the pre-war population of Mosul, have already fled, seeking refuge either with friends and relatives or in camps.