Sepam Qatar, criticised for its visa regime, is in a row with a food supplier

We take a look inside a labour camp in Qatar that is housing migrant workers and is owned by Irish company SEPAM. 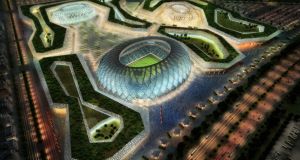 Meals for about 270 migrant workers, mostly from India and the Philippines, were cancelled by a catering and labour camp operator in Qatar because of a dispute with their employer, an Irish construction business.

The migrant workers were living six to a room in a complex in Doha that was the subject of an August 2013 contract between Sepam Qatar LLC and Sunshine Catering, the provider of the labour camp. At one stage Sunshine also threatened to cut off water and sewage services because of the dispute.

Sepam Qatar is part of the Sepam Group, which was founded in the 1970s by Irish businessman Gus Kearney. It is headquartered in Clonmel and, according to its website, has offices in Ireland, the UK, the US, China, Kazakhstan, Kuwait, Bahrain, Qatar and the United Arab Emirates.

As a result the workers in the camp were no longer being fed by Sunshine, he said. “I don’t know how they are being fed.” He said he had not thrown the workers out of the camp despite the non-payment of the agreed fees. “We can’t throw the workers out. That is not human.”

Barry O’Brien, acting general manager with Sepam Qatar, said it was in dispute with Sunshine Catering because of Sunshine’s failure to meet the terms of the contract it had signed with Sepam and that, as a result, Sepam was “forced to review its agreement”.

“Sepam has had to source an alternative catering service provider to cater for the needs of a large, multi-ethnic workforce within the Sunshine accommodation facilities.”

Asked who was providing the service, Mr O’Brien said he did not want to comment further.

Mr Iltaf, who is from Pakistan, said Sunshine had been in business for three years and had labour camps accommodating 3,500 migrant workers in Qatar. The workers, who come from across south Asia, are working on building, road and metro construction projects.

The contract between Sunshine Catering and Sepam Qatar was signed by Mr Iltaf and Anthony Creane, general manager of Sepam Qatar, and concerned a “labour camp” at “Industrial Area, Street 43, Gate No 55, in Doha”.

The lease involved 84 rooms, 12 kitchens and 12 bathroom areas, as well as washing areas.

“This is a labour camp and therefore it should conform to a standard in keeping for its use,” the contract said.

It said the rent would be QAR36 (€9.11) per person per day for the first 400 people accommodated, including catering services, with a 1 per cent discount if the numbers went above 400, and a lesser, revised rate if the numbers fell below 400. Payment was to be a month in advance.

Under the terms of the contract Sepam Qatar was responsible for cleaning the camp, laundry services, pest control, the provision of mattresses and linen and recreation facilities.

Asked about international criticism of the treatment of migrant labourers in Qatar, Mr Iltaf said there were strict rules governing standards in labour camps.

“The labour camp is very nice,” he said. “The Qatari government is very strict. The ministry for labour checks the labour camps and there is a heavy penalty if they are not to a high standard.”

Following publication of a report in this newspaper late last year about the visa regime operated by Sepam for its Irish employees in Qatar, a number of former and current employees of the group, mostly Irish, got in contact and complained about the late payment of wages by Sepam in Qatar and other matters.

One of the key complaints from a number of Irish workers who had worked for Sepam was that it would not give them documentation that would allow them to work for other companies in Qatar.

At the time of the report about the visa regime operated by Sepam, a company spokesman said it complied “with all labour and other pertinent regulations and operates to industry norms in each market where it has a presence. Any queries in relation to the employment conditions in Qatar should be sent to the Irish Department of Foreign Affairs.”

Irish people working for Sepam are provided with apartments. Both Sepam Qatar and Sunshine Catering are joint ventures involving Qatari partners. In the case of Sunshine, Iltaf owns 49 per cent of the company.

5 Coombe should not have given Covid vaccines to family of staff, Donohoe says