Ireland should prepare for return of jihadists

Opinion: About 26 Irish citizens are estimated to be fighting with factions involved in the expansion of the Islamic State 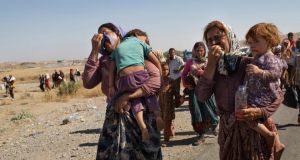 Minister for Justice Frances Fitzgerald has stated she would “not hesitate” to revoke the citizenship of any Irish passport holder involved in illegal or terror-related “jihadi” activities in Iraq or Syria.

This follows reports about the Garda monitoring of the movements of up to 30 Irish residents believed to be engaged in jihad or armed conflict in the Middle East and north Africa.

The International Centre for the Study of Radicalisation at King’s College, London, estimates that about 26 Irish citizens are fighting with various factions involved in the expansion of the Islamic State (formerly known as Isis) from Syria to northern and western Iraq.

About 5,500 foreign fighters are estimated to be participants in the brutal fighting and terror campaigns associated with Islamic State.

About 400 of these fighters are believed to be British. The participation rates of British passport holders in Islamic State operations – including the masked terrorist, dubbed “John the Beatle” who features in the apparent murder footage of US journalist James Foley – are considered worryingly high.

Since the London bombings in 2005, the British government has spent millions on outreach and education strategies – such as one that targets young British citizens groomed for recruitment by radicalised Islamist terror groups. Such programmes seek to present a strong, coherent, counter-narrative to the toxic messaging circulated on social media by Islamist radicals.

British religious leaders such as Bradford imam Alyas Karmani have stated it is imperative community leaders, politicians and media redouble their efforts to engage with vulnerable young British citizens to counter the online recruitment activities of groups such as Islamic State.

The participation rates of young Irish citizens in Islamic State and related Islamist activities abroad – in per capita terms – is similar to that of British jihadis.

These behaviours include classic combat stress reaction symptoms such as depression, hypervigilance, substance abuse and a propensity for self-harm and violent behaviour.

The UN, Human Rights Watch, and Amnesty International have condemned all sides in the Syrian conflict for grave breaches of international law and crimes against humanity. It is imperative, therefore, that Ireland prepares to deal with these returnees.

Many may require counselling and support. Others may require investigation and screening for terrorist acts and breaches of international law. Some, in time, may well be brought before the International Criminal Court to answer charges of war crimes.

Post 9/11, the Irish defence and intelligence community fundamentally reassessed the primary threat to the security of the State. For decades the threat was from dissident republican and loyalist paramilitaries. The so-called “Global War on Terror” prompted authorities to identify the use of Ireland as a “logistics base” or “platform” for the launch of terror attacks by international terror groups as the newly emerging primary threat.

The involvement of a small but growing nucleus of Irish citizens in the increasingly brutal conflicts in the Middle East and north Africa seems to confirm this assessment.

An Garda Síochána, with shrinking resources, has been proactive in its efforts to identify and engage with vulnerable young citizens targeted and groomed by Islamist radicals. It has some experience in this regard. The approach taken by contemporary radical Islamist groups is similar to the recruitment activities of the Provisional IRA and other paramilitary groups in the past.

It is high time Ireland’s politicians and religious and community leaders step up to the plate in combating the violent, anti-social and misogynistic ideology of radical Islamists.

A coherent, uniquely Irish, counter narrative to terror and hatred is required. Dr Tom Clonan is a security analyst