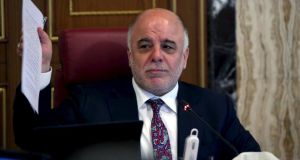 Iraqi prime minister Haidar al-Abadi has secured the unanimous backing of his cabinet to eliminate senior government posts in a bid to end the system of sectarian power-sharing introduced by the US after the 2003 occupation.

He has also demanded an end to sectarian and party quotas for government jobs and fresh investigations into allegations of corruption. His proposals need parliamentary approval and, on most issues, constitutional amendments.

Protests intensified last week due to Iraq’s inadequate supplies of electricity and water during the heat wave that has gripped the region since the end of last month. In Baghdad, Basra, and mainly Shia southern cities where temperatures soared to 50 degrees, protesters demanded Mr Abadi’s resignation. Earlier protests had failed to secure action.

However, Mr Maliki has spent the past year trying to undermine Mr Abadi, a member of the Shia Dawa party to which Mr Maliki also belongs and where he wields influence.

They now hold Mosul, Iraq’s second city in the north, and strategic Ramadi and Falluja in the western Anbar province. Last week, Mr Maliki was accused by a serving minister of wasting $1 trillion of public money and development aid during his eight years in office.

In June, Mr Abadi “retired” army chief of staff General Babaker Zebari and sacked dozens of army and police officers with the aim of restructuring forces that fled the field when confronted by IS.

Unable to trust the military, he has been forced to rely on Iran-raised and trained Shia militias to fight IS, raising concerns in Washington that this will prompt Sunnis to back IS, which they see as less of a threat than Shia militias which have attacked Sunni villages.