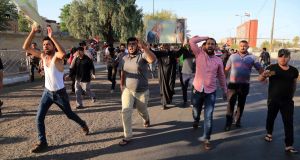 Authorities could not immediately verify reports of several deaths.

The thousands of protesters included supporters of Shia cleric Moqtada al-Sadr and other groups upset with the government’s failure to approve anti-corruption reforms and provide security.

The government imposed a curfew on Baghdad in response to the violence at the Green Zone, which houses Iraq’s parliament, government buildings and many foreign embassies.

The military later said in a statement on state television the authorities had regained control over the “riots”.

“Infiltrators exploited our forces’ preoccupation with preparations for the Falluja battle to infiltrate state institutions and cause chaos,” the Joint Operations Command said, referring to a city 50km west of Baghdad which is controlled by Islamic State.

Protesters entered the cabinet building for several hours. Online photos showed them holding Iraqi flags and flashing peace signs in front of the insignia of the prime minister’s press office and inside a meeting room.

The protesters began withdrawing from the Green Zone to Tahrir Square after a few hours, but witnesses said an elite security force and unidentified gunmen opened fire there.

Sadr expressed support for what he called a “peaceful spontaneous revolt”.

He condemned the government for “killing its children in cold blood”.

State television said Baghdad Operations Command was imposing a curfew in the capital “until further notice”.

“Riot police are dealing with anyone trying to damage state institutions, in accordance with the law,” the military said.

They have added to their grievances the government’s failure to provide security after a wave of bombings claimed by Islamic State in Baghdad this month, which killed more than 150 people.

Sadr did not explicitly call for Friday’s demonstration, where protesters chanted: “Oh army, the country is hurt! Don’t side with the corrupt!”

He has warned that the impasse could hamper Iraq’s fight against Islamic State, which continues to control territory in northern and western Iraq.

Sadr, the heir of a revered clerical dynasty, says he backs Abadi’s plan and has accused other political groups of blocking the reforms due to their own vested interests.