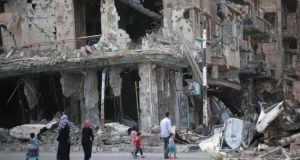 Iranian supreme guide Ayatollah Ali Khamenei yesterday accused the US of using the August 21st chemical weapons attack as a pretext to mount military operations against Syria. “The Americans try to play with words and pretend that they’ve become involved in this case for humanitarian aims.

“I believe the Americans are making mistakes in Syria and they have felt the impact and will certainly suffer loss, ” he told a meeting of the Assembly of Experts, a state body.

Confrontational line
Gen Qassem Soleimani, commander of Iran’s Quds force, has said Tehran would “support Syria to the end”, although recently installed Iranian president Hassan Rouhani has not adopted such a confrontational line, indicating there could be divisions developing over Tehran’s policy towards Syria.

Syrian government and al-Qaeda-affiliated jihadi forces were reportedly fighting in the mountains around the ancient Christian town of Maaloula, 60km north of Damascus yesterday. Townspeople, who still speak Aramaic, the language of Jesus and his disciples, took refuge in a convent after jihadis took over a mountain-top hotel and caves and began shelling the town, which has a mixed Christian-Muslim population.

The clashes at Maaloula coincided with condemnation of the alleged use of chemical weapons near Damascus by Lebanese president Michel Suleiman and his country’s Maronite Catholic patriarch Beshara Rai, and a warning against US military strikes on Syria. The patriarch said only the UN should take action against the culprits.

Mr Suleiman said: “If a [US-led military] intervention happens, I appeal to everyone, external or internal parties, not to involve Lebanon in this issue and to fully neutralise it. Lebanon’s territory, airspace and people should not be part of an action or reaction” to strikes.

His reference to any “reaction” was, apparently, meant to warn Hizbullah, an ally of Syrian president Bashar al-Assad, not to retaliate against Israel if the US mounts strikes against Syria.

Hizbullah reaction
A source close to the militant group Hizbullah told The Irish Times that the movement was saying nothing about its plans. He said it would be foolish to advertise in advance what Hizbullah would do if the US intervenes in Syria. He did reveal, however, that diplomats from various countries had met Hizbullah figures with the aim of reassuring the movement that it would not be targeted by any US military strikes.