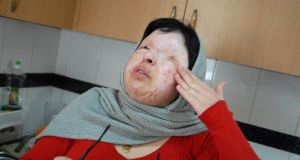 In a highly publicised case in 2011, Ameneh Bahrami (above), a victim of acid attack, received international praise after pardoning her attacker hours before surgeons prepared to blind the man with acid. Ms Bahrami was disfigured and blinded in both eyes because she had repeatedly spurned her attacker’s offer of marriage. File photograph: Kaveh Kazemi/Getty Images

In a literal application of the sharia law of an eye for an eye, an Iranian man convicted of blinding another man in an acid attack has himself been blinded in one eye, marking the first time Iran has carried out such retributive punishment.

The convicted acid attacker, who has not been identified, was rendered unconscious in Rajaishahr prison in the city of Karaj on Tuesday as medics gouged out his left eye, according to the state-owned Hamshahri newspaper.

Mahmood Amiry-Moghaddam from Iran Human Rights (IHR), an independent NGO based in Norway, condemned the blinding as barbaric.

“Medical staff who co-operate with the Iranian authorities in this act have broken the Hippocratic oath and cannot call themselves doctors,” he said.

The man had been found guilty of throwing acid in the face of his unnamed victim five years ago in the city of Qom, blinding and disfiguring him for life. He was subsequently sentenced to be blinded in both eyes, paying a fine, and 10 years’ imprisonment.

Although the convict was sentenced to lose sight in both eyes on Tuesday, the victim - who, under Iranian law, has the final say in the punishment - decided at the last minute to postpone the blinding of his right eye for another six months.

During this period, the attacker will be able to plead with the plaintiff to spare him from being blinded fully.

Acid attacks have been rife in Iran in recent years, usually driven by family feuds.

Hamshahri reported that the man in this case had been hired by the relatives of his victim’s wife to take revenge on their behalf. It was not clear if he had carried out the attack for financial gains or whether he was related to the wife’s family.

Iranian officials, worried about the increase in the rate of acid attacks, have endorsed retribution, but human rights activists condemn it as inhumane.

Islam’s Sharia law allows for qisas (retribution), but it also advises for clemency.

Under Iranian law, victims or their families have the final say in such cases and can halt the punishment at any time.

Other acid attackers have been sentenced to be blinded in Iran, but this is the first known case in which the punishment has actually been carried out.

The authorities had previously admitted that, in most cases, doctors refused to co-operate with the officials.

Raha Bahreini, a researcher with Amnesty International’s Iran team, said punishing someone by deliberately blinding them is “an unspeakably cruel and shocking act”.

She told the Guardian: “Blinding is totally prohibited under international law, along with stoning, flogging, amputation and other forms of corporal punishment provided in Iran’s Islamic penal code, and must not be carried out under any circumstances.”

Instead of carrying out such macabre punishments, Bahreini said Iran authorities “should raise awareness about violence including root causes, ensure that perpetrators of acid attacks are punished with appropriate and proportionate penalties consistent with international human rights norms, and survivors are provided with effective remedies, including compensation and psycho-social and medical rehabilitation.”

Another man, identified by his first name Hamid, was also scheduled to be blinded in Karaj on Tuesday, but his punishment was postponed for a later date at the request of his victim, Davoud Roshanaei, who wanted to carry out the punishment with his own hands.

“Hamid was about to be rendered unconscious on the bed when his father entered the room and asked me for more time,” said Roshanaei, who has been disfigured and lost sight in one eye as the result of the assault.

“I gave them two more months to provide me with compensation for my treatment.”

In a highly publicised case in 2011, Ameneh Bahrami, a victim of acid attack, received international praise after pardoning her attacker hours before surgeons prepared to blind the man with acid.

Bahrami was disfigured and blinded in both eyes because she had repeatedly spurned her attacker’s offer of marriage.

Activists claimed that unlike in other cases across the country, victims in Isfahan had been targeted by hardliners for wearing clothes deemed inappropriate.

The authorities have vehemently denied this charge.