Former Mubarak ally vows to crack down on militant violence 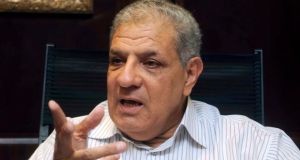 Ibrahim Mahlab said he hoped to form his government within three or four days. Photograph: Reuters

A former member of Hosni Mubarak’s political party has been appointed Egypt’s new prime minister, a day after the cabinet announced its resignation, vowing to crack down on the militant violence that has blighted Egypt since the overthrow of Islamist president Mohamed Morsi.

Ibrahim Mahlab spoke after his appointment by Adly Mansour – the army-appointed president who has been in office since Mr Morsi’s removal in July – and said he hoped to form his government within three or four days.

“We will work together to restore security and safety to Egypt and crush terrorism in all corners of the country,” he said. “Security and stability in the entire country and crushing terrorism will pave the way for investment.”

Mr Mahlab, who was housing minister in the previous administration, will head Egypt’s sixth government since the 2011 uprising that toppled the autocratic Mr Mubarak, beginning yet another chapter in the chaotic post-Mubarak era. Mr Mahlab once belonged to Mr Mubarak’s National Democratic party, and was chief executive one of the region’s largest construction firms. – (Guardian service)