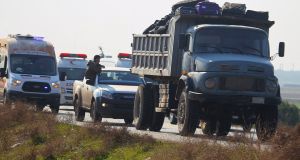 Buses evacuated several hundred fighters and civilians from two besieged areas in Syria on Monday under a deal between warring parties backed by the United Nations.

At least 130, mostly wounded, rebel fighters left the town of Zabadani for the nearby Lebanese border at the same time as 350 fighters and civilians from pro-government besieged Shia towns in northwestern Syria headed for the Turkish border.

Under the deal, the fighters from the Islamist Ahrar al-Sham group and other local Syrian rebel factions holed up in Zabadani for months have been promised safe passage to Beirut airport and then on to Turkey.

At the same time, families and fighters in two besieged Shia towns in the mainly rebel-held northwestern province of Idlib were heading to Turkey and were then due to fly to Beirut.

Relief workers and rebel fighters helped carry several young men in wheelchairs onto ambulances in a square in Zabadani, one witness told Reuters.

The once popular resort city, northwest of the capital Damascus, was one of the rebels’ last strongholds along the border. Before the 2011 outbreak of the Syrian conflict it had also formed part of a supply route for weapons sent by Syria to the Lebanese Shia militant group Hezbollah.

Much of the town was devastated in a major offensive launched in July against the insurgents by the Syrian army and its Hezbollah allies.

Insurgent groups have in turn launched attacks on the two Shia villages in the northwestern province of Idlib, an area bordering Turkey that is mostly insurgent-controlled after a series of advances against the army this year.

The United Nations and foreign governments have tried to broker local ceasefires and safe passage agreements as steps towards the wider goal of ending Syria’s near five-year civil war, which has killed more than 250,000 people.

Earlier this month Syrian government officials said they had agreed on a deal for rebel fighters to withdraw from the last insurgent held area of the city of Homs with their weapons as part of a local ceasefire agreement.

Despite the ceasefire deal, there have been two major bomb attacks in the city in the last two weeks. Twin blasts in the Zahra district of Homs, claimed by Islamic State, killed 16 people on December 12th, and at least 32 people were killed when two bombs exploded in the same quarter on Monday.

Another deal, that sought to extract over 2,000 Islamic State fighters from south Damascus, was scuttled last week in a blow to UN efforts to end a years long government siege of parts of the city controlled by a patchwork of rebel and jihadist groups that has impeded the flow of food and humanitarian aid, starving many people to death.

Iran, which backs President Bashar al-Assad’s government, and Turkey, which backs the rebels, helped organise local ceasefires in Zabadani and the two villages in Idlib in September in the first phase of the deal overseen by the International Committee of the Red Cross.

The mostly Sunni Muslim rebel fighters going to Turkey from Zabadani would then be able to go back to rebel-held areas in Syria through the northern Turkish border or stay for treatment, according to rebel sources close to the negotiations.

They are then expected to go back to other parts of Syria, Syrian minister of national reconciliation Ali Haider said on Hezbollah’s Manar TV station on Monday.