Heaviest use of chemical weapons since Saddam gassed Kurds 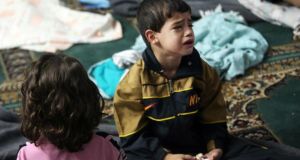 A boy who survived what activists say is a gas attack cries as he takes shelter inside a mosque in the Duma neighbourhood of Damascus yesterday. Photograph: Mohamed Abdullah/Reuters

Hundreds of people, including children, are believed to have been killed in what is thought to be the most significant use of chemical weapons since thousands of Kurds were gassed by Saddam Hussein in Halabja 25 years ago.

Medics, as well as opposition fighters and political leaders, said the death toll had reached 1,400 and was likely to rise further with hundreds more critically wounded in districts besieged by the Syrian military.

Other estimates put the current toll at between 200 and 500. None of the figures could be independently verified.

A team of UN inspectors is seeking access to an area near Damascus where the opposition says the chemical attack occurred, Mr Eliasson told reporters in New York after a closed- door UN Security Council briefing.

Amid fighting between government and rebel forces, “the security situation right now does not allow such access,” he said, calling for a “cessation of hostilities” by government and opposition forces. Mr Eliasson said that the UN didn’t yet have confirmation that toxic weapons were used. The Syrian government acknowledged it had launched a major offensive in rebel-held districts in the east of the capital – described by pro-regime media as the biggest since the start of the civil war – but denied using chemical weapons. “These are lies that serve the propaganda of the terrorists,” a Syrian official said, referring to the armed opposition. “We would not use such weapons.” However, George Sabra, the head of the main opposition group, laid the blame squarely on the Assad regime, saying the scenes of widespread death “constitute a turning point in the regime’s operations”.

“This time it was for annihilation, rather than terror,” he said. The UN Security Council called an emergency session and the White House formally requested that the UN investigate the attack. A UN inspection team arrived in Damascus this week to look into earlier claims of chemical weapon use, but was granted permission to enter Syria with a limited mission to investigate only three specific sites. An expanded mandate to investigate yesterday’s attack, only 16km from the team’s hotel, must be sought by the UN secretary general and then approved by Syria. The US moved quickly to make the request.

Rebel strongholds
Rescuers and victims said the shelling of eastern Ghouta started shortly after 2am and targeted three districts, Ein Tarma, Zermalka and Jobar, all rebel strongholds for the past year.

“It was around 2.30am Wednesday when we received calls from Zemalka and Jobar,” said a Free Syria Army officer, Capt Alla’a al-Basha. “As soon as I and my team arrived at the scene, I saw bodies scattered in the streets. I saw whole houses – none of their residents were alive. When I got there, I could smell what seemed to be burning sulphur and something like cooked eggs. The smoke was not pure white.

“Most of the victims were shivering and they turned yellow in colour. I saw a woman who was tearing at her clothes as she could not breathe.

“The number of the casualties that we were able to document so far is 1,228 martyrs.The doctors think more than 20 shells were fired with fatal gases.”

Doctors at makeshift clinics said they had been overrun by the number of victims. –(Guardian service/Reuters)