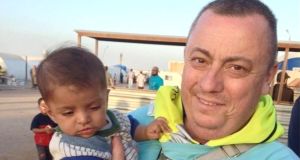 The widow of British aid worker Alan Henning said his family and friends were “numb with grief” after receiving the news that he had been murdered by his Islamic State captors.

Barbara Henning thanked everyone who took part in campaigns and vigils at home and abroad for the aid worker’s release but appealed for privacy after receiving “the news we hoped we would never hear”.

A video showing the brutal murder of the 47-year-old former taxi driver from Salford — who was kidnapped last December in Syria by IS militants — was posted on the internet by the group last night.

The beheading — apparently carried out by the same jihadist with an English accent behind those of three other Western captives including fellow British aid worker David Haines — drew wide international condemnation.

In the video, another US hostage identified as Peter Kassig, was paraded as the next intended victim.

Prime minister David Cameron today said he would use “all the assets we have” to try to find hostages being held by Islamic State and defeat the insurgent group.

Speaking in a broadcast message after the release last night of a video showing the decapitated body of British aid worker Alan Henning, Mr Cameron said the whole country was mourning.

He added: “In terms of what we will do, we will use all the assets we have ... to try and find these hostages, to try and help these hostages ... and do everything we can to defeat this organisation which is utterly ruthless, senseless and barbaric in the way it treats people.”

Mr Cameron was speaking after meeting the heads of Britain’s armed forces and intelligence agencies at his country residence, Chequers.

He said no appeals to the group, which he last night called “repulsive”, to spare the life of the 47-year-old taxi driver from Salford in northern England had made any difference.

“The fact that this was a kind, gentle, compassionate and caring man who had simply gone to help others -- the fact they could murder him the way they did shows what we are dealing with,” he added. “With others, we must do everything we can to defeat this organisation.”

French president Francois Hollande spoke of his “outrage” at the killing. US president Barack Obama condemned the “brutal murder”, and the United Nations Security Council described it as “heinous and cowardly”.

The footage shows Mr Henning kneeling beside a knifeman dressed in black in a desert setting. It is the second such murder of a UK hostage after fellow aid worker David Haines was killed last month.

The gruesome video appears to show Mr Henning, who is dressed in orange, say: “I am Alan Henning. Because of our Parliament’s decision to attack the Islamic State, I, as a member of the British public, will now pay the price for that decision.”

The killer, who speaks with a British accent and is believed to be the man responsible for the previous beheadings, then makes a direct statement to the prime minister: “The blood of David Haines was on your hands, Cameron. Alan Henning will also be slaughtered, but his blood is on the hands of the British Parliament.”

Two American journalists, James Foley and Steven Sotloff, were also beheaded by the terrorist organisation, which is also known as Isis and Isil.

The video then apparently shows the jihadist alongside an American hostage identified as Peter Kassig. Addressing the US president, the militant says: “ Obama, you have started your aerial bombardment in Sham (Syria), which keeps on striking our people. So it is only right that we continue to strike the necks of your people.”

Mr Cameron, who last night arrived back in the UK after visiting British troops including those engaged in air strikes on IS in Iraq, said his thoughts and prayers were “with Alan’s wife Barbara, their children and all those who loved him”.

Washington said the killing of Mr Henning “is again yet another just very clear example of the brutality of this group, and why the president has articulated and is moving out in a comprehensive way to degrade and destroy Isil”.

The latest video emerged a week after the House of Commons overwhelmingly backed the deployment of British military forces to bomb IS positions in Iraq.

RAF jets began bombing missions at the weekend and Mr Cameron announced the deployment of two more Tornado fighter bombers as he visited the Cyprus base from where they are operating yesterday.

Mr Henning was last seen at the end of a video released last month following the beheading of fellow British captive Mr Haines. His wife Barbara earlier this week pleaded for him to be freed. “I ask Islamic State: please release him, we need him back home,” she said. “Some say wrong time, wrong place. Alan was volunteering with his Muslim friends to help the people of Syria. He was in the right place doing the right thing.”

Mrs Henning revealed she had received an audio message of her husband pleading for his life, and had been told that a Sharia court had found him innocent of being a spy.

In a statement, Mr Kassig’s parents Ed and Paula said: “The Kassig family extends our concern for the family of Alan Henning. We have read about his work and his generous character with great respect and admiration.

“We ask everyone around the world to pray for the Henning family, for our son, and for the release of all innocent people being held hostage in the Middle East and around the globe.”