Gaza could be ‘uninhabitable’ by 2020, UN warns 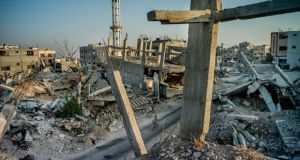 The situation in Gaza has been exacerbated by three Israeli military operations in the past six years and nearly a decade-long economic blockade. Photograph: Tomas Munita/The New York Times

The Gaza Strip, ravaged by wars and nearly a decade of a gruelling Israeli blockade, could become uninhabitable for residents within just five years, the United Nations development agency has warned.

“The social, health and security-related ramifications of the high population density and overcrowding are among the factors that may render Gaza unliveable by 2020,” the UN Conference on Trade and Development (UNCTAD) wrote in its annual report.

In addition to the 500,000 people who have been displaced as a result of the most recent war with Israel in 2014, the report estimates significant economic losses in Gaza, including the destruction or severe damage of more than 20,000 Palestinian homes, 148 schools and 15 hospitals and 45 primary health-care centres.

Gaza, a tiny enclave of just 362 square kilometres (about 225 square miles) squeezed between Israel, Egypt and the Mediterranean Sea that is home to some 1.8 million Palestinians, counts one of the highest population densities in the world.

“Gaza could become uninhabitable by 2020 if current economic trends persist,” the report said.

While the high density is not new, the situation has been exacerbated by three Israeli military operations in the past six years and nearly a decade-long economic blockade.

The blockade had “ravaged the already debilitated infrastructure of Gaza, shattered its productive base, left no time for meaningful reconstruction or economic recovery and impoverished the Palestinian population in Gaza,” the report said.

“Short of ending the blockade, donor aid... will not reverse the ongoing de-development and impoverishment in Gaza,” it said.

Socio-economic conditions in Gaza today are currently “at their lowest point since 1967,” when Israel seized the territory from Egypt in its Six-Day War, according to the report.

The report estimated that the three military operations, including last year’s devastating war that killed some 2,200 Palestinians and displaced half a million more, had caused economic losses close to three times the size of Gaza’s local gross domestic product.

As many as 247 factories and 300 commercial centres were fully or partially destroyed, and Gaza’s only power station sustained severe damage, it said.

Even before last year’s conflict, Gaza’s electricity supply was not even enough to cover 40 per cent of demand, UNCTAD said, adding that 95 per cent of water from coastal aquifers - Gazans main source of freshwater - was considered unsafe to drink.

Unemployment in Gaza meanwhile soared last year to 44 per cent - the highest level on record - hitting young women especially hard, leaving more than eight out of 10 women out of work.

A full 72 per cent of all households in Gaza are meanwhile struggling with food insecurity, and the number of Palestinian refugees who rely entirely on food distribution from UN agency has ballooned from 72,000 in 2000 to 868,000 by last May.

The report also detailed the devastating effect of the blockade imposed by Israel after Hamas militants captured an Israeli soldier in the summer of 2006 and tightened a year later after the Islamists forcibly ousted troops loyal to Palestinian president Mahmud Abbas’s Fatah.

“It inflicted large-scale destruction on Gaza’s local economy, productive assets and infrastructure, and affected numerous industrial, agricultural, commercial and residential facilities either directly or indirectly through debilitated infrastructure and acute shortages of inputs, water, electricity and fuel,” it said.

Exports had basically been completely banned, as imports of anything besides the most basic humanitarian goods had been blocked.

The dire situation has left Gaza relying heavily on aid, but the report warned that while donor support would remain vital, it could not turn around the situation in the Strip alone.