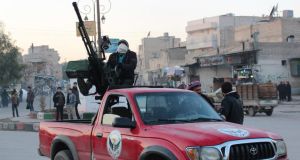 A Free Syrian Army soldier mans an anti-aircraft weapon on the back of a truck in old Aleppo on Thursday. Photograph: Mahmoud Hebbo/Reuters

The massacre coincided with news that the regular Syrian army, backed by Lebanese Hizbullah fighters, has taken control of most of the Qalamoun region near the border with Lebanon. The army is expected to reopen the Damascus-Homs highway and deny insurgents a key route for smuggling arms and fighters from Lebanon into Syria.

The Western-backed rebel Free Syrian Army, headed by General Selim Idriss, has been eclipsed by the 11-faction Islamic Front, an ultra-orthodox Salafi alliance, and the radical fundamentalist Islamic State of Iraq and Syria (ISIS) and Jabhat al-Nusra, both al-Qaeda affiliates.

Unlike the Free Syrian Army, the fundamentalists’ aim is not democracy but an “Islamic state”.

General Idriss denied he was forced to flee Syria when his headquarters and warehouses were seized by the ISIS, prompting the US and UK to halt non-lethal aid to the Free Syrian Army. The premises were later, reportedly, secured by the Islamic Front, at his request.

General Idriss has declared once Syrian president Bashar al-Assad has departed, his forces would be prepared to fight alongside the regular army against al-Qaeda-linked groups which, he said, pose a grave danger to Syria.

However, the Free Syrian Army may not survive to fight the radicals. Units in Raqqa and Deir al-Zor provinces have disintegrated and fighters have joined the ISIS, which has assumed the lead role in Aleppo. The ISIS has 5,500 foreign fighters and 2,000 ideological and 15,000 opportunistic recruits.

Meanwhile, regional rivals Iran and Saudi Arabia are among 32 countries invited to attend the US and Russian- sponsored two-day conference on the Syrian crisis set to convene on January 22nd.

Tehran is allied to the government of Bashar al-Assad, while Riyadh supports both the Islamic Front and the expatriate opposition Syrian National Coalition.

The foreign ministers’ meeting, due to take place at Montreux, is a follow-up of a June 2012 gathering in Geneva which put forward a plan to resolve the Syrian crisis.

The plan involves the establishment of a transitional authority with “full powers” which the opposition interprets as meaning there would be no role for Mr Assad.

The government and opposition are invited to send nine-member delegations and will hold bilateral talks with UN envoy Lakhdar Brahimi on January 24th.

Winding up a Gulf summit in Kuwait, leaders of the six-member Gulf Co-operation Council have backed the coalition’s decision to attend the conference and demanded that “all foreign forces leave Syria,” a reference to Hizbullah guerrillas and half a dozen Hizbullah and Iranian-supported Iraqi Shia groups. Nothing was said about foreign radicals.

Storm front “Alexa” has dumped rain and snow on bombed buildings sheltering families in Syria and makeshift tents housing refugees in Lebanon’s Bekaa valley. The coalition appealed for emergency fuel supplies for areas under opposition control as snow halted an airlift of supplies from Iraq to Syrian refugees in Iraq’s Kurdish region.