Forces in Iraq unite ahead of battle to retake Mosul

Iraqi security forces are preparing for an offensive that could be days or weeks away. Photograph: Reuters

Kurdish peshmerga, the Iraqi army’s elite special operations units, Sunni tribal levees and Shia militias have been marshalling forces ahead of the long-awaited battle of Mosul, the provincial capital of Nineveh held by Islamic State since June 2014.

Iraqi officials claim the offensive could be days or weeks away, not months. The US says the Mosul operation could be months away rather than weeks. US commentators predict it will take place in October and says the Mosul offensive must coincide with the drive to oust Islamic State, also known as Isis, from Raqqa in Syria.

Islamic State has fortified Mosul, its most important possession, with trenches and laid mines and explosive devices along approach roads and in the surrounding countryside.

The Kurds have seized five deserted villages on the Nineveh plain east of Mosul, securing a wide swathe of territory. The Kurds, who enjoy Russian and US support, are positioning troops to move into Kurdish villages and neighbourhoods of the city located on the east to ensure Kurdish residents have their fair share of power once governing bodies are restored. 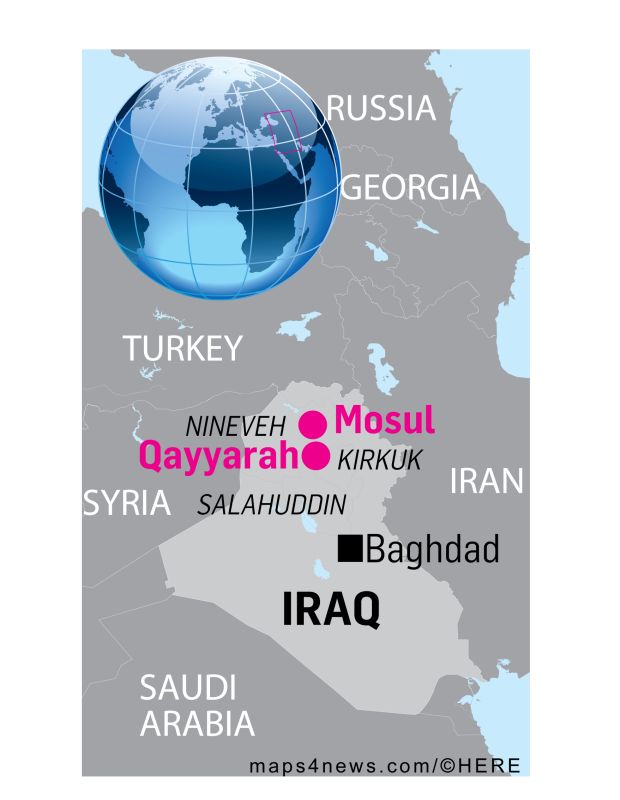 Iraq’s regular army, bolstered by local tribesmen, has retaken from Islamic State the Qayyarah military air base south of Mosul. The base, where Islamic State had manufactured explosive devices, is a major strategic gain, enabling Baghdad to transfer logistics staff and run operations from a site near Mosul.

Some 550 US troops sent to reinforce the 5,000 already in Iraq have been dispatched to Qayyarah to help with logistics and impose security in Mosul once liberated.

Attack helicopters are to be deployed to Qayyarah, which provides a secure supply route across the Tigris river to Irbil in the Kurdish region. The base also enables the army to control the road linking Mosul to Isis-held Shirqat and Hawija in Salahuddin and Kirkuk.

The cautious, drawn-out campaign to regain Nineveh province and Mosul, its capital, began in late March and has made slow progress, partly because Baghdad has had to convince the Sunnis of Nineveh, Salahuddin and Kirkuk provinces that the Shia fundamentalist-dominated government led by Iraqi prime minister Haidar al-Abadi seeks to “liberate” them from oppression.

Many Sunnis welcomed Isis in 2014 as they had been marginalised and persecuted under his predecessor, Nuri al-Maliki.

While the Kurds and the Iraqi army consider the Hashd al-Shaabi popular mobilisation forces to be full partners in the coming offensive, Baghdad will have to handle them carefully. The Hashd, largely consisting of Iranian-backed Shia militias, have abused, killed and cleansed Sunnis during and following other campaigns. At least 3.4 million Iraqis have been displaced, the vast majority of whom are Sunnis who are given little aid.

To ensure co-operation, co-ordination and the success of the Mosul campaign, Kurdish politician Khasraw Goran has recommended all participants must reach an agreement defining their roles during the campaign and laying down rules for governance to protect Sunni, Kurdish, Yazidi and Christian minorities.

2:22 Fintan O'Toole: A real republic should not have charity delivering public welfare

2:38 6:09 Rapid rise in coronavirus Delta variant in Ireland over past week to be discussed at Cabinet

2 Son charged with murdering his father in Dublin