Dutch plan to keep refugees close to Syria to be tabled 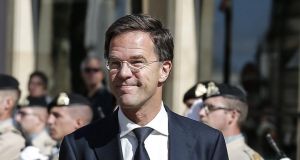 Dutch Prime Minister Mark Rutte: the Dutch proposal involves registering refugees in safe countries as close as possible to the war zones they are trying to escape. Photograph: Julien Warnand/EPA

How should the migrant crisis that threatens to engulf Europe be resolved: by helping those fleeing the war zones of the Middle East to resettle in Europe, or by helping them to stay as close as possible to their own countries, as 95 per cent already do by choice?

That’s a question that wasn’t raised by European Commission president Jean-Claude Juncker in his speech last Tuesday outlining a controversial quota system to resettle 160,000 arrivals. But perhaps it should have been. It will be raised by the Netherlands – which assumes the EU presidency in January – when justice ministers meet in Brussels today in search of what European Council president Donald Tusk calls “concrete signs” of solidarity.

Without being unduly pessimistic, the likelihood of such solidarity can perhaps be gauged by Tusk’s pre-emptive tweet that, in the absence of agreement, he would call a special summit of EU heads of state for later this month.

The EU’s high representative for foreign policy, Federica Mogherini, says it’s “unrealistic”. Her concern is that if all fleeing refugees must be registered in countries such as Turkey, Lebanon and Jordan, which between them have already accepted 3.5 million desperate souls, those countries risk being “destabilised”.

That’s a fair point, and one Dutch prime minister Mark Rutte addressed last Thursday when he told parliament he remained convinced of the plan’s workability – and that he expected “sufficient backing” from other EU countries.

The logic of Rutte’s proposal is this: thousands of refugees are trying to touch EU soil, knowing that under the Dublin regulation they are entitled to seek asylum in the first member state they reach.

Nobody knows who they are, where they are coming from or where they will end up. By registering migrants when they reach Middle East “reporting centres”, they would first have a safe haven; second, their identities would be established; and third, they could be given permits for Europe in accordance with Juncker’s quotas.

The countries chosen as reporting centres would receive increased EU aid to set up what Rutte called “UNHCR-plus” facilities – ideally including access to education and employment: “It will take energy, money and manpower but, by improving life for refugees in safe areas, some may feel they do not have to attempt to come to Europe . . . The money we save on settling those refugees in Europe can then be reinvested in the safe areas.”

In addition, Turkey, Lebanon and Jordan would have a safety valve as refugees determined to relocate to Europe would be resettled here in an organised manner.

He may not be the ideal ally, but Hungarian prime minister Viktor Orban agreed an injection of say €3 billion to Syria’s neighbours to help those displaced by the civil war could help end mass migration.

So the Dutch message is starting to get through. It may not gain traction today. Indeed, it may disappear. But it least it helps to define issues. That’s not a bad start.