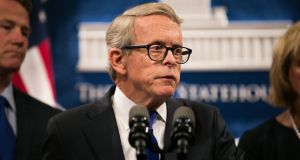 Ohio governor Mike DeWine has tested positive for coronavirus, just ahead of a planned meeting with US president Donald Trump.

The Republican governor’s office said that he took the test as part of standard protocol before meeting Mr Trump at an airport in Cleveland.

He had planned to join the president on a visit to the Whirlpool factory in north-west Ohio.

His office said the 73-year-old had no symptoms, but was returning to Columbus. His office said he and his wife, Fran DeWine, will both be tested there. Mr DeWine then plans to quarantine at his home in Cedarville for 14 days.

In recent weeks, Mr DeWine has pleaded with Ohioans to take personal responsibility over the virus’ spread across the state. He avoided a statewide mask mandate until July 23rd when the number of daily cases in the state began to push over 1,000.

Mask-wearing also has been a point of contention at the Statehouse, where many Democratic lawmakers have donned masks while many Republican lawmakers have not.

Nicola Sturgeon has warned that an emergency lockdown in Aberdeen could extend to other towns in the region after health officials linked 32 pubs and golf courses to the outbreak in the city.

The Scottish first minister said all pubs and restaurants in the city had to close from 5pm on Wednesday, as she barred people from visiting other households indoors and urged residents to avoid non-essential journeys greater than five miles.

Health officials in NHS Grampian named 32 pubs, restaurants and golf clubs visited by some of the 54 people infected in the outbreak, as the scope of their test-and-trace investigation widened to include several businesses in Aberdeenshire.

The health board said a further 36 infections had emerged overnight in the Grampian area, although it remained unclear how many were directly linked to the Aberdeen cluster, which began late last week at the Hawthorn Bar in the city centre.

The Aberdeenshire businesses involved in the NHS Grampian investigation included the Cock & Bull gastropub close to Donald Trump’s golf course near Balmedie north of Aberdeen, the Aboyne golf club 30 miles west of Aberdeen and the Marine hotel in Stonehaven, 16 miles south of the city.

Australia’s second-biggest city of Melbourne began the first day of a six-week total lockdown on Thursday with the closure of most shops and businesses raising new fears of food shortages, as authorities battle a second wave of coronavirus infections.

Shops were boarded shut and streets were deserted in the city of about 5 million people, the capital of Victoria state, which reported 471 new Covid-19 cases and eight deaths in the past 24 hours.

More than 18.88 million people have been reported to be infected by the novel coronavirus globally and 707,758 have died, according to a Reuters tally. Infections have been reported in more than 210 countries and territories since the first cases were identified in China in December 2019.

Australia has now recorded about 20,000 Covid-19 cases and 255 fatalities, still far fewer than many other developed nations.

But the Victorian outbreak threatens to ruin that record and spill into other states such as Queensland where the virus has been all but eliminated.

Victorian premier Daniel Andrews urged Melbourne residents, who have already endured weeks of less severe lockdown, to stay calm and abstain from panic buying amid a surge in demand at supermarkets.

“There’s no need for people to be trying to stockpile months and months of food,” Mr Andrews told reporters in Melbourne.

Abattoirs are one of the few businesses allowed to stay open in Melbourne, though with a reduced workforce, under the “stage four” lockdown which took effect at midnight on Wednesday.

“We have tried to get that balance between reducing the amount of movement, therefore reducing the number of cases, but not compromising what you need being on the supermarket shelves,” Mr Andrews said.

Forecast national peak unemployment had been revised upwards to about 10 per cent due to Victoria’s reimposition of restrictions, prime minister Scott Morrison said.

Counting those workers on Australia’s wage subsidy scheme, Mr Morrison said effective unemployment would be closer to 14 per cent.

“These measures will have a very significant cost, and it will impact the recovery path,” Mr Morrison told reporters in Canberra.

Australia had previously forecast unemployment would hit a high of 9.25 per cent this year, as the economy endures its first recession in three decades.

After closing its international borders early, locking down cities and launching a campaign of mass virus testing, Australia had reopened in June with daily cases in the single figures.

But hidden transmissions among staff employed at quarantine centres led to wider community transmissions in Victoria, which has recorded triple-digit new cases for weeks.

Victoria now has the bulk of infections in the country, with more than 13,000 reported cases.

Germany announced mandatory tests for travellers returning from high-risk regions after new coronavirus cases breached the 1,000-a-day threshold for the first time since May, fuelling fears of a return to an economically disruptive lockdown.

Part of the increase was due to more tests taking place, he said, but the impact of holidaymakers returning to Germany and of flagging social distancing discipline was also significant.

Germany classifies almost all the world outside the European Union as high risk, as well as some regions within the bloc, including Aragon, Catalonia and Navarre in Spain, and Belgium’s Antwerp province.

The compulsory tests mean travellers will not have to quarantine for two weeks. Anyone who refuses to take the test could face a fine of up to €25,000.

“If anybody thinks they can be stubborn at the airport and deal with the fine when it comes later, no. They’re going into quarantine for two weeks,” Mr Spahn added.

Germany’s approach is similar to that in neighbouring France, which requires travellers from some countries to take Covid-19 tests at airports and ports. Some other European countries require travellers to take a test in the days before their trip.

The Philippines on Thursday recorded another jump in coronavirus cases to overtake neighbouring Indonesia as the country with the highest number of confirmed Covid-19 infections in East Asia.

A recent surge in cases of the virus in and around the capital Manila has pushed authorities to reimpose a lockdown affecting around a quarter of the country’s 107 million people.

The Philippines recorded 3,561 new infections on Thursday, taking its total confirmed cases to 119,460. That is higher than Indonesia’s 118,753 infection cases.

The death toll rose by 28 to 2,150, which is less than half of Indonesia’s 5,521 fatalities, but is expected to grow after the recent spike in cases.

President Rodrigo Duterte announced late on Sunday a two-week lockdown in and around Manila, which accounts for two-thirds of the country’s economic output. – Agencies