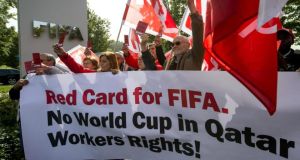 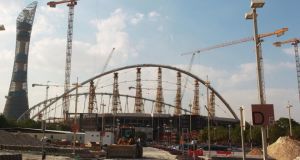 A general view of Khalifa Stadium in Doha, which is undergoing complete renovation in preparation to host some of the matches for the 2022 World Cup in Qatar. Photograph: STR/AFP/Getty Images

The International Trade Union Confederation has accused the Irish Government and others of a “conspiracy of silence” with regard to World Cup 2022 hosts Qatar, which it calls a “slave state” running an “apartheid” labour market.

ITUC general secretary Sharan Burrow has dismissed assurances from Qatar that conditions for hundreds of thousands of migrant workers in the Gulf state have improved and argues that “nothing has changed on the ground” in the “richest country in the world”.

The controversial Kafala system, which ties workers to a Qatari employer and prevents them from changing jobs or leaving the country without the permission of that employer, has not been abolished yet, she insists, adding that the ITUC’s prediction last year that 4,000 migrant workers would die prior to the World Cup in seven years’ time is, in fact, a “very conservative” estimate.

“That has shockingly increased in the last year . . . people use that figure as if it’s shocking but, in fact, it’s based on the only two embassies that publish their figures,” she told The Irish Times.

Qatar is five years into a 10-year $150 billion (€138 billion) infrastructural project that was due to finish in 2020 in good time to host Fifa’s international sporting showpiece. By popular consent among sources in the business community in Doha, Qatar is behind schedule and the number of migrant workers in the state is steadily increasing.

About 85 per cent of the 2.2 million-strong population is foreign, with two-thirds of those estimated to be migrant labourers from countries such as India, Nepal, Indonesia and, increasingly, African nations.

While the focus of international attention has been on those working on infrastructural projects primarily driven by the Fifa World Cup, Burrow says “torture” is ongoing in the domestic labour market, causing migrant women to flee their workplaces.

“They are beaten, they are burned, they are raped, sometimes, and of course we see if they become pregnant they are criminals, not the man of the house.

“Even if you take the Indonesian statistics – one embassy – seven to 10 Indonesian women, who are domestic workers, run away every week . . . because they just can’t take it any more. And yet they will be rounded up by police, they’ll be treated as the criminals, they’ll be sent to detention centres.

“I’m not talking about minor infringements of human rights here; there are no human rights.

Burrow says it is not too late for the Qatari authorities to “end the Kafala system, put freedom of association in place, get the big recruitment companies in, set a decent minimum wage, put up a compliance system and allow workers to be heard”.

“It’s just appalling when they could make very simple choices to change the system and be respected internationally as a country developing with dignity.”

The countries of origin of these workers do “bear a responsibility”, she says, while she accepts there are some companies which operate to good standards. However, she laments the lack of action taken by governments with diplomatic leverage, including Ireland, accusing them of staying silent for fear of jeopardising trade deals.

“Why are companies not respecting the fact that there is nothing in the Qatar labour law that requires them to act in that way? They can take responsibility for equal treatment of workers as if they were workers in Ireland or the UK or Europe. You wouldn’t see Irish workers or German workers treated like that.

“Nobody should escape responsibility for seeking, operating and taking subsidies, frankly, to run big events in a slave state.

“There has got to be some world values base where people say modern-day slavery is simply not acceptable and we are not going to tolerate it.”

Taoiseach Enda Kenny and Minister for Jobs, Enterprise and Innovation Richard Bruton visited Doha as part of a trade mission to the Middle East in January last year and afterwards welcomed “new contracts and business developments worth more than €65 million” as well as the creation of 95 jobs in Ireland.

In May, then minister for trade and development Joe Costello led an Enterprise Ireland trade delegation of 22 companies to Doha and Oman.

The Department of Foreign Affairs has denied Burrow’s claim that the Government has been silent on the issue of human rights in Qatar, insisting Ireland has “never shied away from addressing human rights”.

With specific reference to Qatar, the department said: “As member of the Human Rights Council for the period 2013-2015, Ireland made a national statement during the universal periodic review (UPR) of Qatar in 2014 in which we raised concerns about widespread reports of violations of the rights of migrant workers and about the Kafala system of sponsorship. Ireland encouraged Qatar to thoroughly review the regulatory regime for migrant workers with the aim of bringing it into line with international human rights and labour standards.”

“The promotion and protection of migrant workers rights in Qatar will remain a priority for Ireland. The department will avail of every appropriate opportunity to raise the issue both bilaterally, through the Irish Embassy in Abu Dhabi, which is also accredited to Qatar, and through relevant multilateral channels, including through the UN and EU human rights mechanisms.”

The ITUC has been “heartened” by the support from football associations around the world that “absolutely abhor the game being shamed in this way” and it has not “given up on Fifa”, according to general secretary Sharan Burrow.

“We are appalled that Fifa has also dodged responsibility; we’ve made it clear to them that they hold the ultimate power for doing good. They could say, ‘Listen we want to hold the World Cup there but you have to comply with international labour standards’, and the Qataris would move.

“There’s no doubt about that, they want the World Cup. They have based their future on being able to attract large events, sporting events, car exhibitions, you name it.

“So Fifa does hold extraordinary power but I think everybody commonly accepts there is a level of corruption in Fifa that hasn’t been eradicated yet. So we are hoping the election will be based around that.”

Ms Burrow said the ITUC had had “enormous amounts of support from the players themselves”.

“The participants themselves, in all sports, are often the victims in this because their associations are taking the subsidies and booking the events but not thinking about the conditions for them or the fact they are forcing sports people to pursue their careers in a slave state, which doesn’t sit comfortably with many of them,” she said.

Irish Times sports journalist Carl O’Malley died on Thursday night of last week. He became ill during a soccer game and was taken by ambulance to St Vincent’s Hospital, where he died at the age of 36. His funeral took place on Tuesday.

His last major assignment with the newspaper was this feature on preparations for the 2022 World Cup.