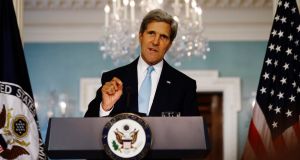 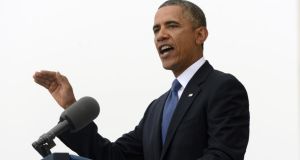 President Barack Obama faces questions from the US military about the risks and benefits of a strike on Syrian President Bashar al-Assad’s government. Photograph: Michael Reynolds-Pool/Getty Images 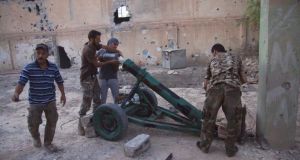 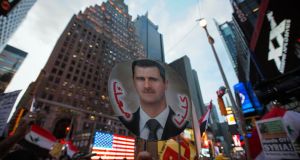 Local activists and Syrian-American supporters of syrian president Bashar al-Assad hold up his image during an anti-war rally in front of a US armed forces recruiting station in Times Square, New York. Photograph: Adrees Latif/Reuters 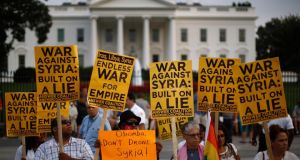 The “Act now to stop war and end racism” coalition holds a rally outside the White House in Washington. Photograph: Jason Reed /Reuters 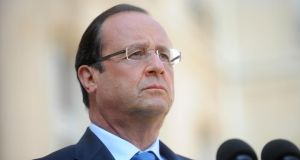 Francois Hollande told the daily Le Monde in an interview that he supported taking “firm” punitive action over an attack he said had caused “irreparable” harm to the Syrian people and said he would work closely with France’s allies. Photograph: Antoine Antoniol/Getty Images

US secretary of state John Kerry said today there is “clear” and “compelling” evidence that the Syrian government used poison gas against its citizens, as the Obama administration released an unclassified intelligence report on the use of chemical weapons in Syria.

“Read for yourselves the evidence from thousands of sources,” Mr Kerry said. “This is the indiscriminate, inconceivable horror of chemical weapons. This is what Assad did to his own people.”

Mr Kerry said more than 1,400 people were killed in the chemical attack, including more than 400 children. He said the administration has “high confidence” in the intelligence, much of which was being released to the public as he spoke.

But he vowed that the government has carefully reviewed the evidence to avoid the kind of intelligence failures that preceded the Iraq War.

“We will not repeat that moment,” he vowed.

US president Barack Obama is preparing to respond to the chemical attacks with a limited military strike on Syria despite Britain’s refusal to participate in the assault and expressions of deep reservation in Congress and among the US public.

The administration has repeatedly said there is no question that Assad’s government used chemical weapons against his own people in an attack on August 21st that killed hundreds of people. That would cross the red line that Mr Obama drew last year, when he declared that the large-scale use of chemical weapons by Assad would “change my calculus” about US involvement in Syria’s bloody civil war.

Aides have said that the president has not yet made up his mind about whether to strike Syria. But administration officials have said they will release an intelligence assessment about the use of chemical weapons in Syria by the end of the week.

Pentagon officials have moved warships and other military assets closer to Syria in preparation for a possible attack, which would most likely involve the use of cruise missiles. US defense secretary Chuck Hagel has said the military is ready to execute any decision by Mr Obama.

Any military strike looks unlikely at least until UN investigators report back after they leave Syria on Saturday.

The timing of any strikes may be complicated by Mr Obama’s departure late on Tuesday for Sweden and a G20 summit in Russia. He was not expected to order the strikes while in Sweden or Russia.

French president Francois Hollande told the daily Le Monde he still supported taking “firm” punitive action over an attack he said had caused “irreparable” harm to the Syrian people, adding that he would work closely with France’s allies.

An aide to Russian president Vladimir Putin, a close Assad ally, however, seized on yesterday’s British “no” vote which set back US led efforts to intervene against the Assad regime, saying it reflected wider European worries about the dangers of a military response.

Britain has traditionally been the United States’ most reliable military ally. However, the defeat of a the government motion authorising a military response in principle underscored misgivings dating from how the country decided to join the US-led invasion of Iraq in 2003.

Russia opposes any military intervention in Syria, saying an attack would increase tension and undermine the chances of ending the civil war.

Russia holds veto power as a permanent UN Security Council member and has blocked three resolutions meant to press Assad to stop the violence since a revolt against him began in 2011.

US officials suggested that Mr Obama would be willing to order limited military action even without allied support. “He (Obama) believes that there are core interests at stake for the United States and that countries who violate international norms regarding chemical weapons need to be held accountable,” the White House said after the British vote.

British prime minister David Cameron said he regretted parliament’s failure to back military action in Syria but he hoped Mr Obama would understand the need to listen to the wishes of the people. “I don’t think it’s a question of having to apologise,” he said in a television interview.

Finance minister George Osborne, one of Cameron’s closest allies, accepted that the vote had raised questions about Britain’s future relations with its allies. “There will be a national soul-searching about our role in the world and whether Britain wants to play a big part in upholding the international system,” he said.

1 When the RIC opened fire on a crowd in Ennis during the Clare grain riots
2 Portraying Sinn Féin as a dangerous party is a political strategy
3 Shannon at high risk of flooding as rainfall warning issued for most counties
4 Coronavirus: Almost 60 new cases recorded in Italy as two die
5 Sinn Féin to hold public meetings around country to rally support for government efforts
Real news has value SUBSCRIBE