Teacher among dead in Aleppo due to use of indiscriminate weapon, claim rebel leaders 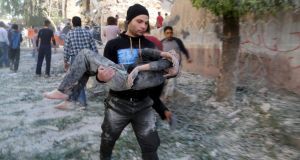 A man holds an injured boy after what activists said was a barrel bomb dropped by forces loyal to Syrian president Bashar al-Assad hit a school and residential building in the Seif al-Dawla neighborhood of Aleppo. Photograph: Hosam Katan/Reuters

Children were killed and wounded in Aleppo on Sunday in a barrel-bomb attack that destroyed a building where students were sitting exams, residents and rights groups said.

At least seven people were killed, including four children and a school-teacher, and dozens wounded in the air strike that targeted the Seif al-Dawla teaching centre. Rebel authorities accused the regime of “barbaric” targeting of schools and kindergartens in the city, as the fight for Syria’s largest metropolis intensifies.

Videos and photographs posted by residents and citizen journalists on the scene showed civil defence workers and civilians pulling corpses and the wounded from the wreckage, as well as children with bloodied faces in burial shrouds.

“They call these the terrorists,” one volunteer says in a video as he wraps one of the children in a burial shroud.

Zaina Erhaim, a journalist who lives close to the district that was allegedly struck by the barrel bomb, described chaotic scenes in the aftermath and parents rushing to the scene in search of their children.

“Two girls around six in the nursery across [from where the barrel bomb struck] were crying and bumping into each other,” she wrote on her blog, describing their words to a passerby. “One of them asked him: ‘Uncle, so we haven’t died?’”

The bombing prompted rebel authorities to shut down schools and cancel final exams for students. They said the move was aimed at “protecting the lives of students and teachers from the deliberate, barbaric bombing on schools, institutes and nurseries”.

School enrolment in Aleppo, which has been devastated by three years of war, has fallen to 6 per cent, according to Save the Children.

Aleppo is a key battleground between the Assad regime and the mostly Islamist rebels who share control of the city. Last week, the rebels announced a new coordinated offensive to “liberate” Aleppo from regime control and have launched raids and bombings near areas under regime control.