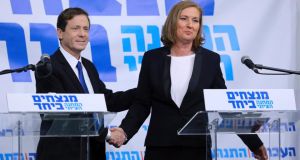 Until now the Likud was by far the largest party in the polls, predicted to win about 22 seats in the 120-seat Knesset, compared with only 13 for Labour, which was one of a number of medium-sized parties. The merger, announced at a joint news conference on Wednesday night, has turned the tables and created a credible centre-left alternative capable of emerging as the single largest party after the March 17th election.

A poll by Channel 2 television yesterday showed Labour would win 24 seats, as opposed to 23 for the Likud, and only 36 per cent picked Mr Netanyahu as their preferred choice for prime minister, with 33 per cent favouring [Labour leader Yitzhak] Herzog-Livni. Previous polls showed Mr Netanyahu far ahead of all other contenders.

Under the merger deal, Ms Livni, the outgoing justice minister who led Israel’s failed peace talks with the Palestinians, was guaranteed the number two slot on the joint slate behind Mr Herzog, with two other members of her party given safe slots. The surprise element in the deal was a rotation agreement under which Mr Herzog would serve as prime minister for the first two years if Labour heads the next government, followed by two years with Ms Livni as prime minister.

Mr Herzog argued that the deal will benefit all Israelis by boosting the prospects of defeating Mr Netanyahu.

“This is a different model of leadership, working together for the success of the state and the flourishing of its citizens,” he said. “You have to put the egos aside.”

Ms Livni also said the joint leadership can defeat Mr Netanyahu. “It can unify the entire Zionist camp and put an end to the leadership of the extreme right.”

Ben-Dror Yemini, a columnist for Israel’s top-selling Yediot Aharonot newspaper, described a “scent of change in the air” following the merger.

“Herzog managed, possibly for the first time in his career, to present himself as a leader. Because Herzog, who is considered to be uncharismatic and unappealing as a leader, made a leader’s decision of the first order: he agreed to a rotating candidacy for prime minister. That is quite a concession. He displayed leadership,” he wrote.

Even if Labour emerges as the largest party after the election it will still have to woo the centre parties as well as Avigdor Leiberman’s Yisrael Beiteinu and the ultra-Orthodox parties into a coalition. Not an easy task, but no longer a mission impossible.