News that putting a double bed on a five-hour flight cost €98,000 came a day after 10,000 Israelis protested against austerity 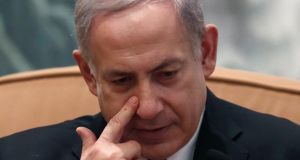 Binyamin Netanyahu: following the public outcry, his office announced that the prime minister had been unaware of the cost of ordering the bed. Photograph: Aly Song/Reuters

The decision by prime minister Binyamin Netanyahu to install a double bed on the flight taking him and his wife Sarah to London for Margaret Thatcher’s funeral last month has caused outrage in Israel.

Installing the double bed on the five-hour flight cost the Israeli taxpayer an extra €98,000, and raised the overall cost of the flight to €329,000.

The revelation by Israel’s Channel 10 over the weekend came a day before more than 10,000 Israelis took to the streets to protest against an austerity budget that will be voted on today by the government.

Mr Netanyahu, who was re-elected as prime minister in January, warned along with other ministers over recent weeks that there is no alternative to painful cuts and belt-tightening by all sections of society.

Initially the prime minister’s office tried to justify adding the sleeping cabin , noting that the Netanyahus departed Israel at midnight after a busy day attending gatherings marking Israeli Independence day. Meetings were scheduled in London with the British and Canadian prime ministers and Mr Netanyahu needed to rest ahead of his arrival.

The office clarified that from now sleeping cabins will not be ordered for his short trips to Europe, including this week’s trip to Russia for urgent talks with president Vladimir Putin over Russia’s sale of anti-aircraft missile systems to Syria.

In contrast to Mr Netanyahu, president Shimon Peres, who turns 90 in August, didn’t ask for a rest cabin when he flew to Korea in 2010, a 11-hour flight, and settled for a business-class seat instead.